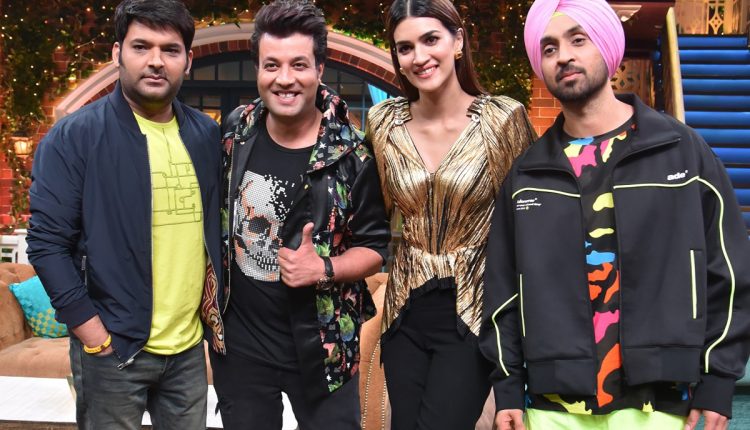 1 To 2 Takes Is All It Took For Diljit Dosanjh To Complete A Dance Number With Sunny Leone, Revealed On The Kapil Sharma Show

Punjab’s superstar Diljit Dosanjh and, ‘Fukre’ actor Varun Sharma will be seen gracing the sets of Sony Entertainment Television’s popular comedy show The Kapil Sharma Show. Accompanying them will be graceful actor Kriti Sanon who will share some very funny stories which will leave everyone in splits. The trio will be seen promoting their latest comedy venture, ‘Arjun Patiala’ and revealing some behind the scene stories with the co-actors and producer. Diljit Dosanjh who is known for his style quotient will be seen wearing fluorescent colored outfit which broadly highlighted his fashion. Too add on, Kapil will also be seen wearing a fluorescent T-shirt, clearly matching Diljit’s style quotient.

During the show Kapil asked Diljit to reveal his experience working with Sunny Leone in Arjun Patiala as in the movie, Diljit is seen performing a peppy number with Sunny Leone on the song ‘Crazy Habibi vs Decent Munda’. Considering Diljit is quite shy and an introvert personality, Kapil tickled Diljit to reveal how many retakes did he take while performing with Sunny. To which Diljit said, “I completed the song in just 1 to 2 takes. It didn’t take me more than 2 retakes as we were well prepared and clear on our part. Working on various different projects and with different artists, I feel comfortable enough to coordinate and work with anyone in the industry.”

Further in the show, Kriti’s parents Geeta Sanon and Rahul Sanon were also present on the sets to meet their favorite comedian Kapil Sharma. In a conversation with Kapil, Kriti’s parents shared an interesting incident when her parents were once embarrassed to be recognized as a celebrity’s parent. Geeta narrated, “We went on a 50% sale shop. There, the onlookers recognized us and were gossiping that, ‘Kriti’s parents are buying outfits from a 50% sale store.’ At times we feel it’s better if sometimes people don’t recognize us at certain places. (Laughs).” She humorously added that Kriti’s father Rahul urged her to leave the shop as he was embarrassed.