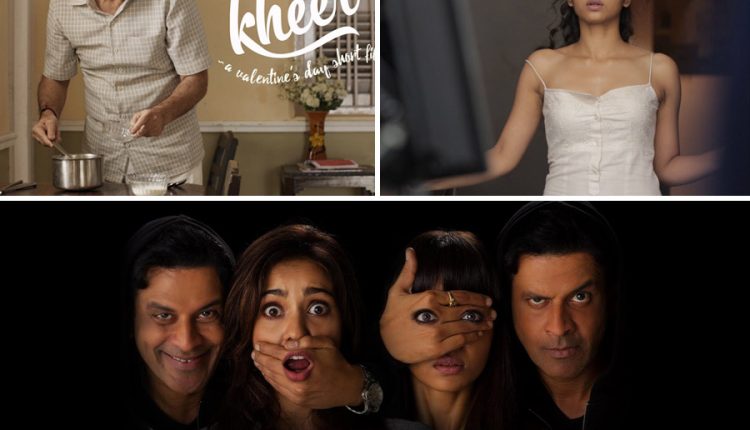 Earlier, short films used to be the launch pad for newbies who wanted to make it big in acting. Now, the game has changed completely and short films have evolved to be so much more. Actors and directors are no longer afraid to experiment with different genres and several short films have gained a lot of critical acclaim as well as mass appeal. In the past few years, short films have grown by leaps and bounds and we now see A-list celebs being a part of these vibrant short tales.

Anupam Kher made his short film debut in the starting of the year on the occasion of Valentine’s day with Kheer. The film is as sweet as the name itself, canvassing a story of an elderly couple in love, with a message of finding love no matter what. Directed by Surya Balakrishnan, the film stars Natasha Rastogi along with Anupam Kher, making it to the audience through the youtube channel Terribly Tiny Talkies.

Naseeruddin Shah-starrer Interior Café Night showcases an intriguing conversation between two couples in two different time periods at the same moment. Directed by Adhiraj Bose, the film talks about a lover who has been given a second chance by the fate and this time he just won’t let her go. It’s a 12-minute short film also stars Shernaz Patel, TVF-fame Naveen Kasturia, and Shweta Basu Prasad delivering in stellar roles.

Positive is a 2007 Hindi short film directed by Farhan Akhtar and produced by Farhan Akhtar and Ritesh Sidhwani under their Excel Entertainment banner. The star cast consists of the veteran actors like Shabana Azmi and Boman Irani in lead roles. The movie was a part of JaaGO initiative on growing awareness about HIV/AIDS among the masses.

Directed by Rakesh Kumar and brilliantly performed by Kalki Koechlin, the film talks about the presence of shallowness in the entertainment industry, while casting a better picture to understand the forms of domestic violence. The rapid fire round, in the end, is a must watch.

Manoj Vajpayee has played several roles in the various short film but this one was special as the film also stars one and only Raveena Tandon. Directed by Vinay Jaiswal, the movie is hilarious and jingoistic at the same time, while teaching us the importance of the freedom—perfect for watching this Independence Day.

Directed by famous Bollywood director Shirish Kunder, Kriti is a dark, psychological thriller, featuring some of the greatest actors of Bollywood like Manoj Vajpayee, Neha Sharma and Radhika Apte.

Directed by Sujoy Ghosh and starring Radhika Apte as the lead, the short film is a Bengali drama thriller. Ahalya also stars legendary Bengali actor Soumitra Chatterjee and along with Tota Roy Chowdhury in important roles. The film is tightly packed with the brilliant direction, a powerful storyline and thrilling moments.

Made by the creators of Ahalya, this film stars Konkana Sen Sharma along with Tillotoma Shome in the lead roles. The film is highly realistic and shows the unexpected friendship between two diametrically opposite people. The story is well driven, the star cast is capable and the direction is dynamic, making the film one of its kind.

A beautiful short film starring Nawazuddin Siddiqui and Tejaswini Kolhapuri is dedicated to the current generation. The movie delivers a strong message for the youth of today about suicides and complications in relationships.

Directed by Karan Tejpal, the film stars Deepak Dobriyal. It shows the story of a politician who is unexpectedly dependent on a common man. The story is very different and Dobriyal has hit it out of the ball park with this serious performance, unlike his other roles where he plays goofy and comic characters.

Huma Qureshi and Gauhar Khan take a step into the world of the web with this sweet film. The story of two acquaintances becoming friends is highlighted here. This is short but holds a powerful message and will definitely melt your heart.

Directed by Queen director Vikas Bahl, the film stars Bollywood cutie Alia Bhatt in the lead. Sponsored by Vogue, the short film portrays a utopia for women, where a girl doesn’t have to worry while traveling back to home in odd hours, can wear whatever she wants, and approach a car full of men without being afraid for her life.

Yet another Terribly Tiny Talkies production, Elaichi will have you on the edge of your seat the entire time. It showcases the difference between two people living together along with an analysis of how happy they are. This five-minute film stars Divyendu Sharma and Nimrat Kaur in lead roles, along with Vibha Chibbar.

Did you get a chance to watch ’em all? Let us know which ones are your favourites.

#MANCRUSHMONDAY: THESE PHOTOS OF SIDHARTH MALHOTRA WILL MAKE YOUR HEART SKIP A BEAT

A Lesser Known Khan , Who Was Not Less Talented