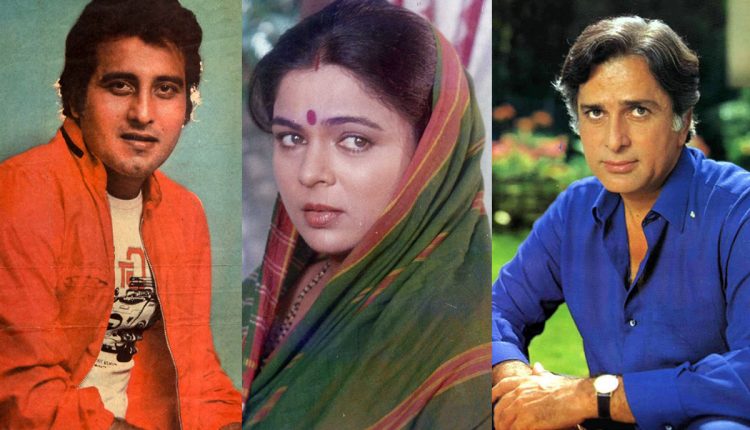 5 BOLLYWOOD CELEBRITIES WE LOST IN 2017

2017 seems to be a tough year for all Bollywood fans, as some of our best known and well-loved celebrities bid their last goodbye this year to all of us. It’s unfortunate to lose some of the most talented and important gems of the film industry but their work made a significant impact on cinema and left an indelible mark.

Shashi Kapoor passed away on December 4, after prolonged suffering from liver cirrhosis. His death definitely left a void in the Indian film industry. But the most charming actor of his times Shashi gave Indian Cinema, some of the most memorable and heart-wrenching dramas. His art of playing many real-life roles that of a theatre artist, film actor, producer, and a public intellectual gave him the title of India’s first crossover star.  In a career spanning nearly six decades, the legend starred in over 175 films.

Vinod Khanna’s rugged persona and charm made him a hot favourite with the hoi-polloi. He was one of the few actors who started his career with playing small and negative roles in films and left the show business during the peak point of his career and stardom in 1982 to follow his spiritual guru Osho. But, he made a comeback in 1987 like a pro with hit films like Insaaf and Satayamev Jayate. He was one of the rare celebrities who played a villain and a star in reel life and also lived as a sanyasi and an active politician in real life. He lost his battle with bladder cancer at the age of 70 and breathed his last in April 2017. He has featured in more than 137 films of which 48 films are two-hero film, of which he shared the screen with the superstar Amitabh Bachchan in almost 10 films and proved as one of the best star collaborations of the film industry.

The Padma Shri awardee Om Puri was a colossus of parallel and new wave cinema. The Powerhouse of talent had an illustrious film career, spanning over four decades. One of the most versatile actors in the film industry, made his acting debut with the 1976 Marathi film Ghashiram Kotwal after which he never looked back. Puri was full of zeal and enthusiasm, who had worked in an array of critically and commercially successful film. He conquered in every foreign films and series with his acting skills including Bollywood. He was known for breaking the stereotype of the conventional ‘good looking‘ Bollywood hero by setting an example of artistic prowess. The actor was also known for speaking his mind, as in his last time-period of life,  he raised his voice for freedom of the film-maker to cast stars of his choice and minced no words in expressing his aversion to narrow-minded, skewed and resentful nationalism.  The critically acclaimed actor succumbed to a major heart attack in January after setting a milestone after working in around 300 films in his spanning career of four decades.

The veteran actress Reema Lagoo was known for playing mother’s role opposite some of the biggest stars in the industry like Salman Khan (Maine Pyar Kiya), Akshay Kumar (Jai Kishan), Sridevi (Gumrah), Madhuri Dixit (Hum Aapke Hain Koun) and Shah Rukh Khan (Kal Ho Naa Ho).  Although Nirupama Roy was the original favourite mother of Bollywood, Lagoo was the one who gave a new definition to motherhood in Bollywood films. She managed to transform the image of mother as a friend and mentor. Over the course of her career, in a hero-centric industry, Reema made her own way to climb the stairs of success in Bollywood as well as TV industry.  She became popular on TV doing sitcoms such as Shriman Shrimati and Tu Tu Main Main. She lastly appeared as a negative character of Dayawanti Mehta in her last serial Naamkaran which again proved that the talented actress can play various kind of character and her acting skills are not limited to be a mother in films.  In May 2017, the veteran actor died of a cardiac arrest.

All of them will always be remembered for their great contribution to the Indian cinema and may their souls rest in peace.