5 THINGS THAT WE LOVED ABOUT VEERE DI WEDDING!

Finally, women have their version of Dil Chahta Hai and Zindagi Na Milegi Dobara as the much-awaited film Veere Di Wedding that celebrates the friendship and lives of its four female protagonists has released and we absolutely love Kareena Kapoor’s latest #notachickflick. The project helmed by Shashanka Ghosh and written by Nidhi Mehra and Mehul Suri is about four women trying to sort out their life which include things such as relationships, marriage and family.

After watching the first-day first show we are here tell you 5 things we loved about Veere Di Wedding!

The Veeres are very relatable!

In the movie, we can relate to many scenes especially the conversation with the best buddy about everything from ex-boyfriends, secrets, sex to many serious discussion about life. The movie will definitely remind you of your best pals! Just one thing from the film I can’t relate to is that all four girls are rich AF and if they had a fight they plan a trip to Thailand. So, neither I am that rich or my friends have that much of money to plan a trip outside the country after our fights. The maximum we can do in our case is after months of planning, we finally plan a trip which is also limited to Goa. 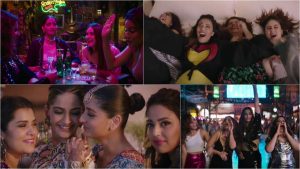 Things which we rarely see in our Bollywood films 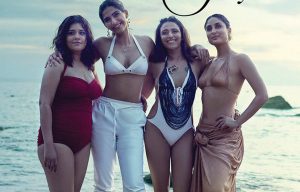 Swara and Shikha’s witty and double meaning dialogues are fun to watch!

No doubt Swara Bhaskar as Sakshi and Shikha Talsania as Meera got some of the most hilarious dialogues in the film. The makers used the language commonly spoken by our generation and it perfectly synced with the vibe and setting of the movie. “Baahar se Sati, andar se Slutty”, “Aaj ham kutton ki tarah piyenge”, “Ab teri lene ke liye degree bhi chahiye?”, Jitna bhi padh lo, graduation, post-graduation but jab tak BC mangalsutra gale mein nahi lagta, tab tak life complete nahi”, Guess what an orgasm is called in Hindi, ladies? Charam Sukh!,” are some of the best dialogues form the film.

The peppy and upbeat music perfectly goes with the wedding theme of the film. Songs like Laaj Sharam, Veere, Munni and Teri puppy le loon will have you groovin’ along and Arijit Singh’s Aa Jao Naa is a delight. And the party anthem Tareefan is my most favourite song from the film. 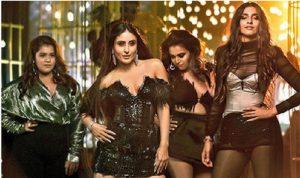 From the first poster of the film, it is clear the film is high on fashion game. As the film is produced by Rhea Kapoor, the movie is literally loaded with designers clothes, beautiful locations and expensive sets. All four Veeres from Kareena Kapoor Khan, Sonam Kapoor Ahuja, Swara Bhaskar and Shikha Talsania looks stunning on the screen. From their night suits to party outfits to wedding lehengas everything look so beautiful and eye-pleasing that you just want to steal every outfit from them. 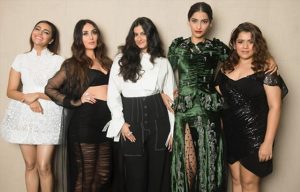 SHAHID KAPOOR TO TAKE A PATERNITY BREAK POST THE BIRTH OF HIS SECOND CHILD?

PATAUDI KIDS ARE SLAYING WITH CUTENESS!