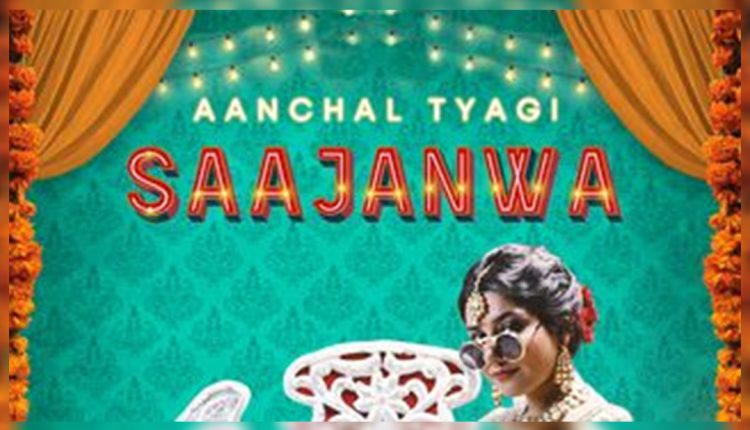 23rd November’22 : Fresh from her last single – the racy Paris London Amsterdam,  Aanchal Tyagi has dropped her new song “Saajanwa”, with IndieA Records. Composed by Abhijeet Srivastava & written by Shayra Apoorva, and sung with verve by Aanchal, Saajanwa gives us a quirky and funny outlook on modern day love.

The song begins with a snarky depiction of the bride and groom, and it reflects the lover’s different moods – sometimes brimming with romanticism and sweet nothings, other times sulking on a whim, hoping to be appeased. The video is set against the backdrop of a young couple’s wedding and portrays a completely stressed-out bridegroom who has to cope with the bride’s shenanigans. Saajanwa has an indie mood with a catchy beat, melodic vocals, and an immensely engaging video.

Speaking about the song, Aanchal Tyagi states, “I appreciate the space of indie music as created for itself and that independent music reveals an artist’s actual sentiments and emotions because he/she is allowed to reign free in their creativity, and not bound by any dictates. Saajanwa is a fun song, it has a special verve and is quirky and I want to term this as indie-pop. Abhijeet Srivastava, an upcoming Bollywood composer has composed this song and the lyrics by Shayra just sets the mood for the song. Pop production led by Aman Moroney gives the track a super kick. At the end of the day, the audience just wants good music and that’s what my team aims at. I’m super grateful to Ashish Sir & Ujjla Ma’am for making this happen and I hope the listeners love Saajanwa as much as the fun I had singing it.”

Music from IndieA Records is distinct on its own. The sound is not derivative and each artist under the label has their own distinguished soundscape. Music from IndieA is not limited to any genres or templates or language. It truly is inclusive of all styles and sounds. The label is built as a vehicle for the export of contemporary Indian music, across genres, to a much wider global audience.

On The Kapil Sharma Show, B-town iconic playback singer, Udit Narayan shares the story of how he met the love of his life Deepa