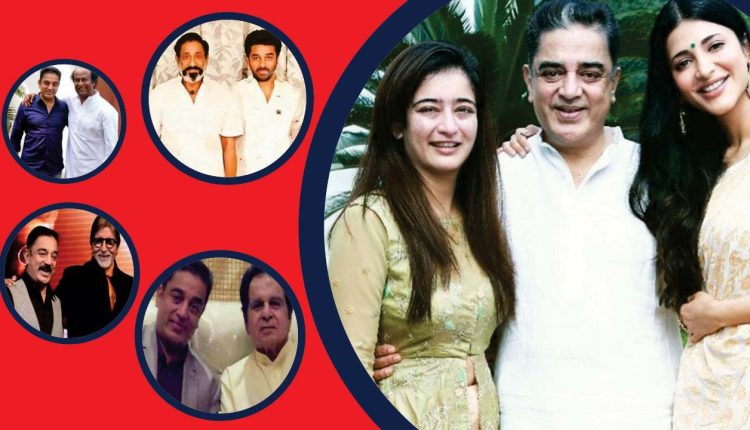 Birthday Special: A tribute to Kamal Haasan on his 68th birthday today on November 7

My oldest friend from the Tamil film industry yaane ki none other than Ulaganayakan as he is called Kamalahaasan has turned 66 today. And he has been a part and parcel of not only the Tamil and Telugu films but also Malayalam as well as Hindi film industry for over the last 55 years, a feat which no one else can boast of in either the Indian or foreign film industry, including Sachin who has been a child star right from the 70’s. 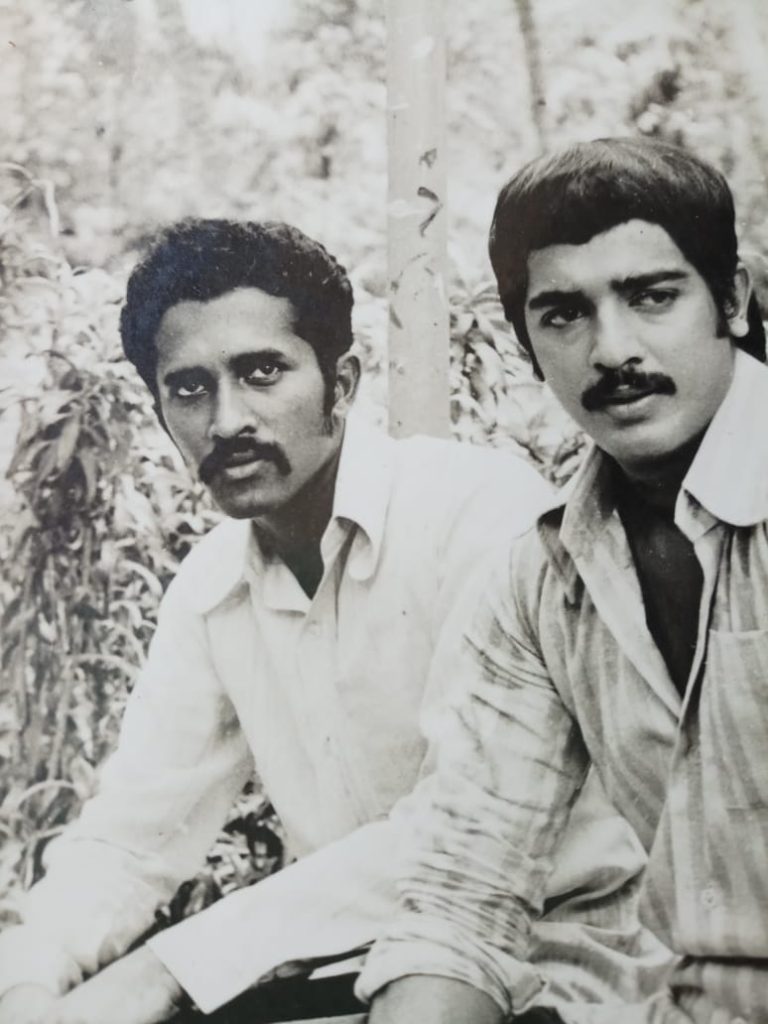 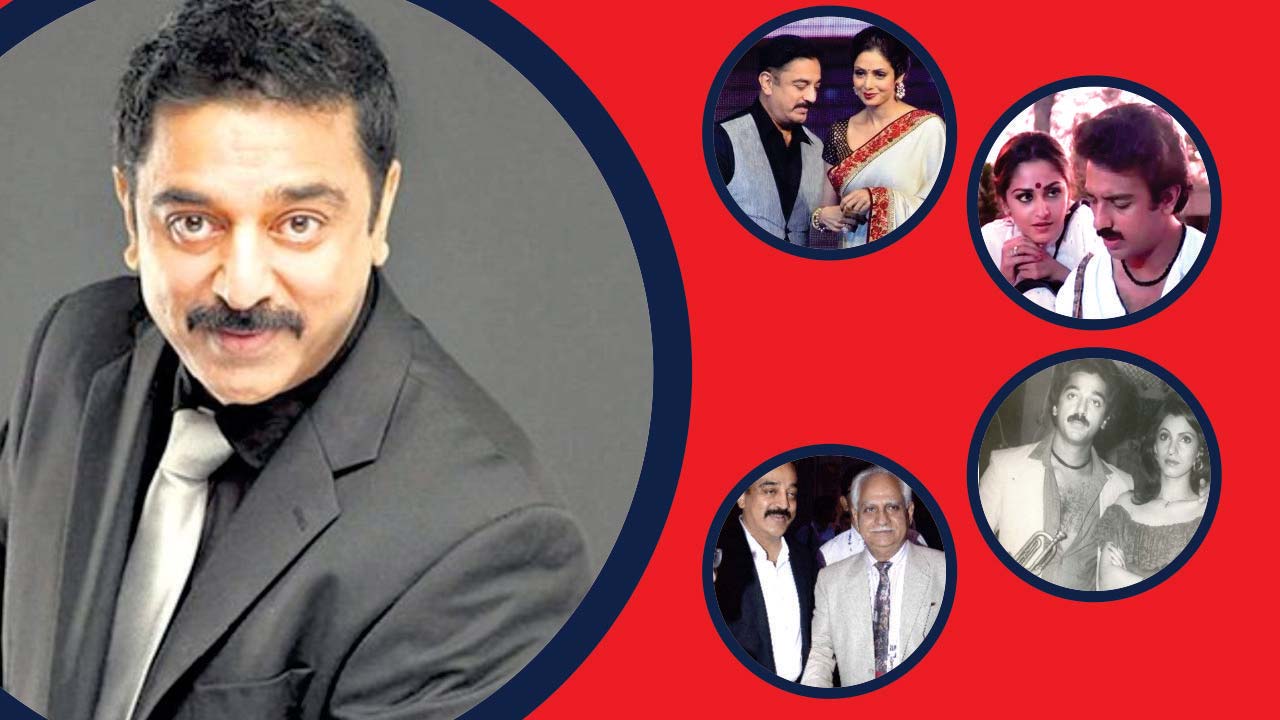 I have had the proud privilege of having known the rebel star that Kamalahasan has always been right from the time he was struggler in Tamil films, where he was climbing step by step the ladder of fame slowly and steadily.

Kamal Haasan was born on 7 November 1954, in a Tamil Iyengar family, to D. Srinivasan, who was a lawyer and freedom fighter and Rajalakshmi, who was a housewife. Kamal Haasan was initially named as Parthasarthy. His father later changed his name to Kamal Haasan. His brothers, Charuhasan (born 1930) and Chandrahasan (born 1936), have also acted. Haasan’s sister, Nalini (born 1946), is a classical dancer.

He received his primary education in Paramakudi before moving to Madras (now Chennai) as his brothers pursued their higher education. Haasan continued his education in Santhome, Madras, and was attracted towards film and fine arts as encouraged by his father.At the age of six he won the President’s Gold Medal for Best Child Actor for his debut film, Kalathur Kannamma.

tars. If you wonder why I did not take up journalism in Mumbai since I was born here, the frank and honest answer is simple. 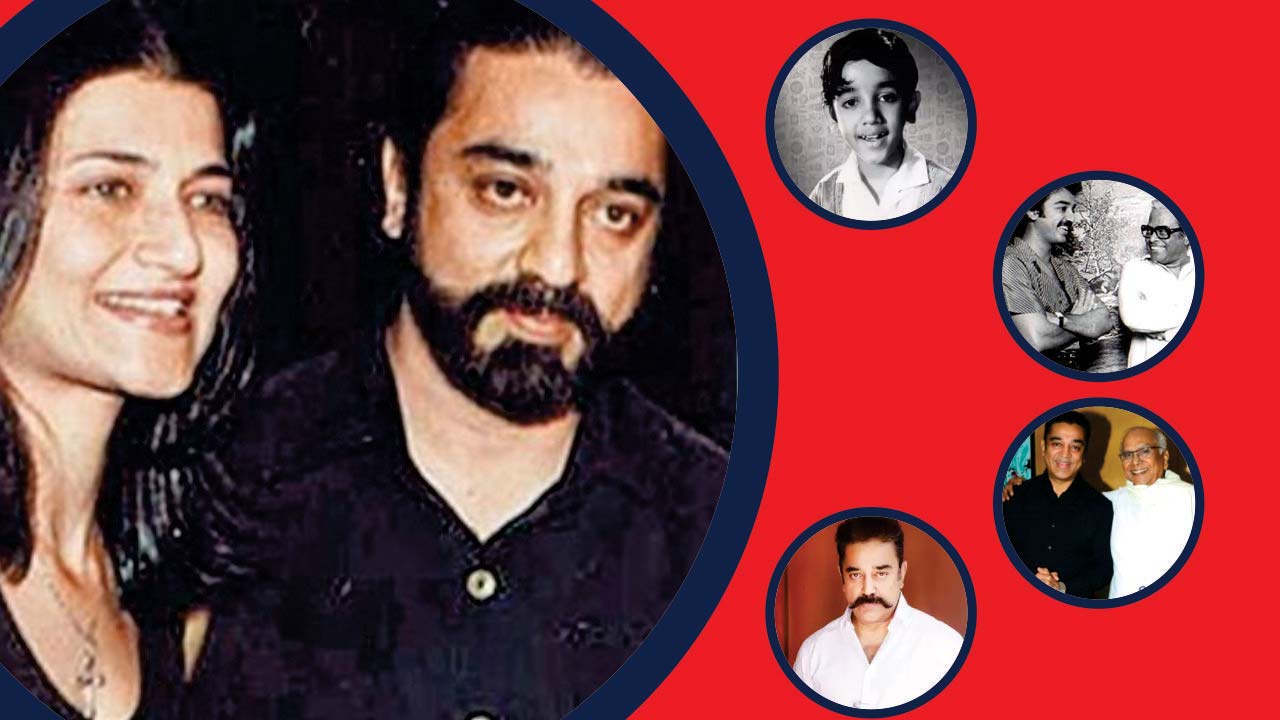 I did not know any sources in Mumbai to lead me to the stars of the time like Dharmendra or Jeetendra for that matter Sanjeev Kumar. My friend Praveen Kumar was a top photographer at that time in Chennai and whenever I used to go to Chennai by train, he sued to make me accompany him to various studios there.

In the course of my visits to various studios, I bumped into several newcomers of that time who have become the legendary super stars over the years. Like Kamalahaasan, Sridevi, Jaya Prada etc, besides super stars of the South then like MGR, Sivaji Ganeshan and Gemini Ganeshan and K.R. Vijaya, Jai Shankar, Sivakumar, who was the father of today’s stars like Suriya and Karthi and Sujatha thanks to Praveen Kumar who used to click photographs of the stars as well as newcomers whenever I used to interview them in Chennai.

I think I am digressing from my topic today and that is the rise and rise of an actor called Kamal Haasan. Though over the years, I have drifted away from him after I became very good friends with another newcomer of that time who was junior to Kamal- Rajanikant. By strange coincidence , Kamal got married to my cousin Vani Ganapathy after falling in love with her and Ironically it was Kamal who, incidentally had his wedding reception at the Taj at Mumbai , who had requested me to give company to Rajanikant when he had come down to Mumbai to attend Kamal’s wedding reception. It was way back in 1978.

It was only when I was taking Rajanikant around Gandhi Market in Sion that crowds started thronging towards him and he had told me casually that he had learnt acting from the Adyar Film Institute in Chennai and was working in a few Tamil films in supporting roles.

I remember the first time that I met Kamal Haasan officially for an interview was when he had come down to Mumbai to receive his first ever Filmfare award for his performance in a Tamil film. It was long before Bollywood even had heard

about the magnetic screen presence of an actor called Kamalahaasan who was working right from the age of 10 with stars like MGR and Sivaji Ganeshan in Tamil films.

Kamal, who was staying at Ritz Hotel where the Filmfare management had put him up, called me in the evening at 5 pm after 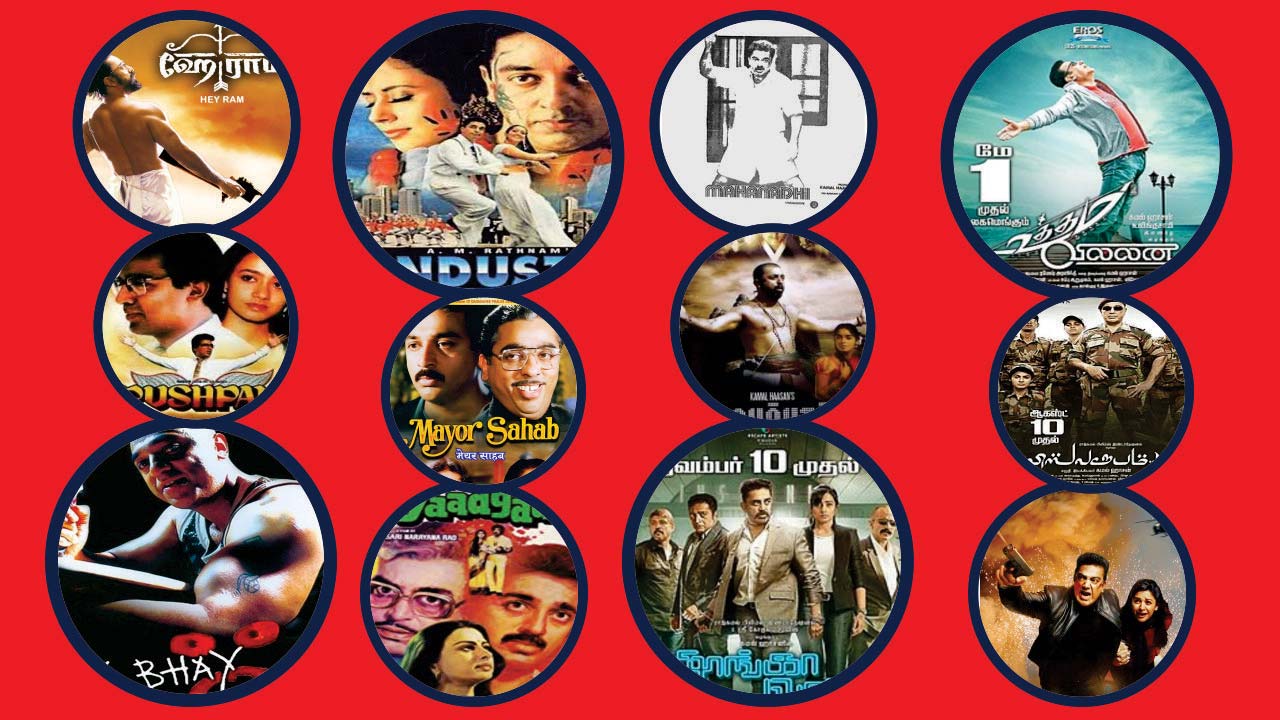 he had reached the hotel to ask me to come to the hotel and to take his interview. If I am not mistaken, it was way back in 1975 or 1976, 44 years ago. I had met him earlier in Chennai with Praveen Kumar.

I was game for the interview but unfortunately as I was working in the Hotel Oberoi Towers as an Accounts Supervisor, I could not reach his hotel at 6 as I was held up in my office and reached Ritz only by 7 and after a hurried interview, Kamal showed towards me a rare gesture by handing over his room keys to me since his order for sandwiches and coffee had not arrived and implored me to take my own time and finish the snacks that he had ordered and left the hotel to receive his award.

Kamal and I were great friends and used to bump into each other, whenever he used to come to Mumbai to shoot for his Hindi films after he became popular with Ek Duuje Ke Liye, which was released in 1981 but our cordial relationship started deteriorating , especially after he fell in love with Sarika and divorced my cousin Vani. Though I was as cordial with him as earlier, he started avoiding me and taking ill of me to my co-journalists.

Once I remember I was invited to Chennai by the late PRO Gopal Pandey to cover the shooting of an untitled film starring Amitabh Bachchan and Kamal Haasan in the lead. Though the film which was to be produced by producer Poornachandra Rao was shelved unceremoniously after a few days, I remember at a party the producer had thrown at the Taj Coromandel at Chennai, I was ignored royally by both Amitabh Bachchan, who had in any case imposed a ban on the press earlier and also Kamal Haasan as my relationship with him had deteriorated.

When there was another PRO earlier, ( I am not sure whether it was Ajit Ghosh with whom I was at loggerheads then) Kamal had specifically asked him not to invite me to his launch party when he launched Hey Raam and the The cold war went on till one day PRO Peter Martis who was my good friend and wanted to see me shake hands with Kamal, told me that Kamal was shooting near my house at a school in Charkop for Chachi 420 and invited me to cover the shooting.

To mend our strained relationship, I not only went there and interviewed Kamal but also offered to interview him for a couple of TV channels when the reporters requested me if I could interview him since they were aware of the fact that I knew more about him than they knew. Kamal was emotional when I told him that he could come to my house nearby and relax during the lunch break but he could not come because he was busy with not only his shooting but also various interviews with various TV channels that day.

What I like the best about Kamal is that besides the fact that he is a great thespian, he is also known for refusing any kind of brand endorsement. Haasan endorsed a brand called Pothys for the first time in 2015. His daughter, Shruti Haasan also has previously endorsed Pothys. Haasan has also stated that should he ever act in commercials, the revenue earned from them would be donated to HIV affected children. Right now, Kamal is busy and popular as the host of the popular serial on Star Vijay- Bigg Boss-Tamil. 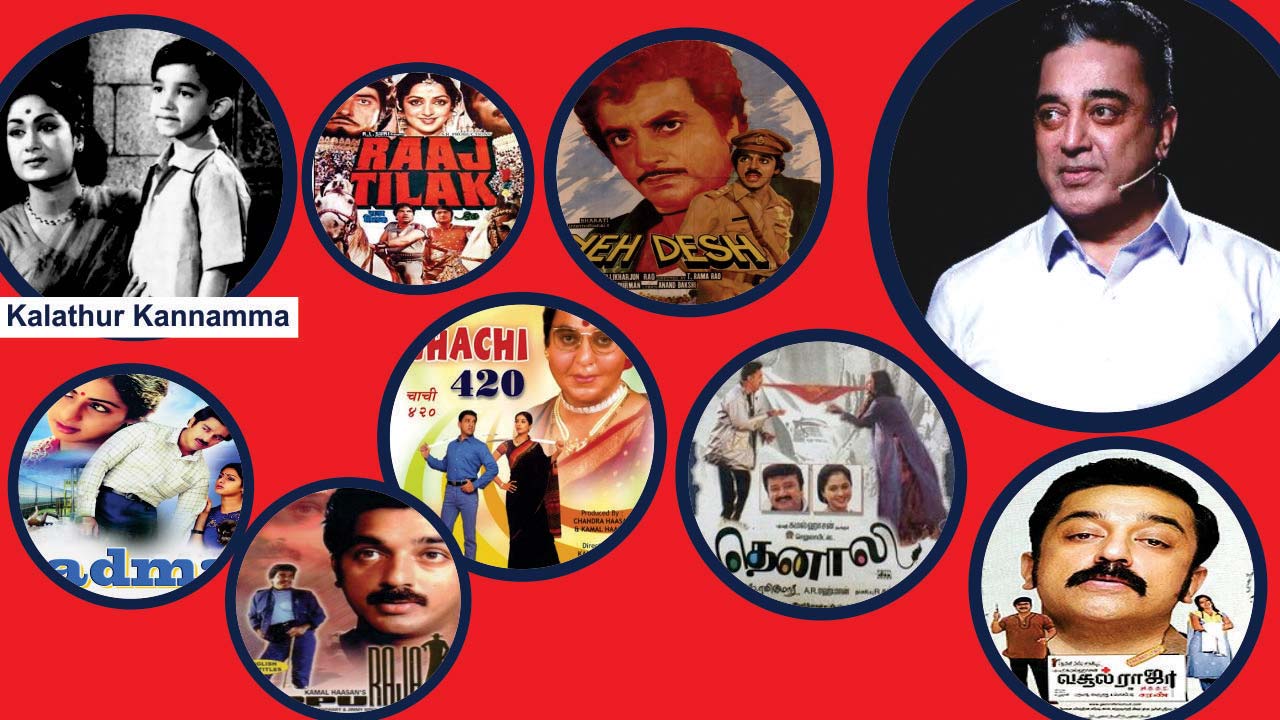 The party’s flag displays six joined hands in a circle in alternate red and white colors with a white star at its centre in a black background. Kamal Haasan began his political journey from late President A. P. J. Abdul Kalam’s residence and his memorial at Rameswaram. Unfortunately, his party contested in 37 seats in 2019 Indian general elections and lost. Makkal Needhi Maiam’s vote share in the 2019 Lok Sabha election was 3.72% (in the seats it contested)

As fate willed it, though I was invited to attend the grand launching of his mega film Dasavatharam in Chennai by his PR person, I missed my flight that day because of traffic and could not attend the mahurat in Chennai and thereafter our meetings became far and few.

While wishing Kamal a happy 66th birthday, all that I can say is that actors may come and actors may go but no one can ever take the place of a natural actor like Kamal Haasan and I am lucky that I have had a love hate relationship with Ulaganayakan Kamal Haasan. Ulaga Naayakan in Tamil means the hero of the world. Vazhga Ulaga Naayaka!

DEATH ANNIVERSARY: DID SANJEEV KUMAR DIE EARLY BECAUSE OF HIS RECKLESS LIFESTYLE????