Master Calligrapher Achyut Palav was recently in America on an invitation to an international calligraphy exhibition called‘ Calligraphies in Conversation’. His demonstration on Devnagari Calligraphy was a part of this exhibition in which selected paintings of noted calligraphers were displayed. Similarly a few digital works in the art form were included to encourage the new generation of artists. This event was organized in a press where old bindings such as letterpress, block-making are taught even today. The demonstration by Achyut Palav was a part of the opening ceremony. His extraordinary styles were much appreciated by the audience. In his stay, he also conducted a Masterclass for students, where they were taught the ‘Devnagari Kitta’. Even though the language and the script were new to them, the students were eager and happy to learn Indian calligraphy. Their excitement of getting a chance to use a traditional ‘Boru’ instead of working on a computer was evident on their faces. 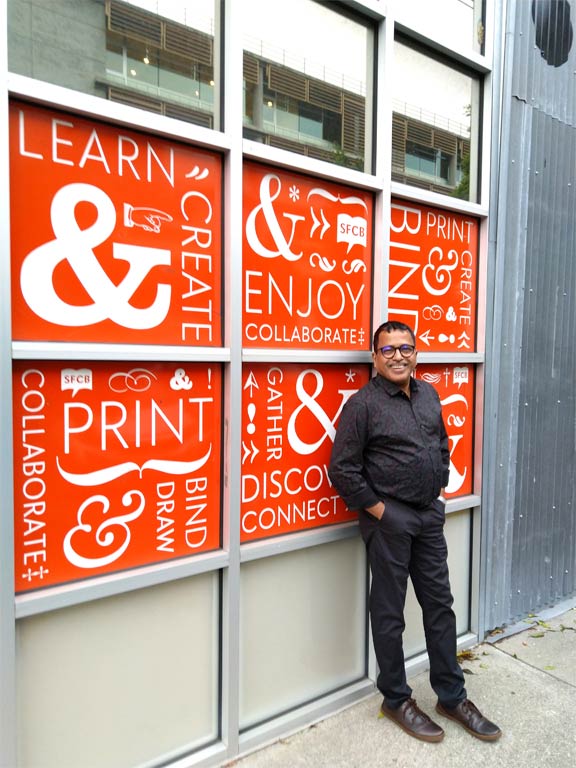 Apart from this exhibition, Achyut Palav was also invited to events organized by the San Francisco Marathi Mandal and various Gujarati Organizations. A special demonstration was organized by the ‘Bal Sanskar Varga’ for children and their parents. It was arranged with the aim of familiarizing the new generation of Indians abroad to a beautiful aspect of the art & culture of the country of their origin. The organization named ‘Kala’ had also arranged a demonstration as well as a discussion with Achyut Palav and various artists. He also gave an informative audio- visual presentation on the beauty of Indian calligraphy and its potential for commercial application. A program called ‘Musical Strokes’ was jointly organized by Rangarang and Marathi Mandal. A unique fusion of calligraphy was presented by Palav along with local artists based on Marathi and Hindi songs. The Marathi and Gujarati Mandals of Bay Area had organized Roman Calligraphy classes for the youth. 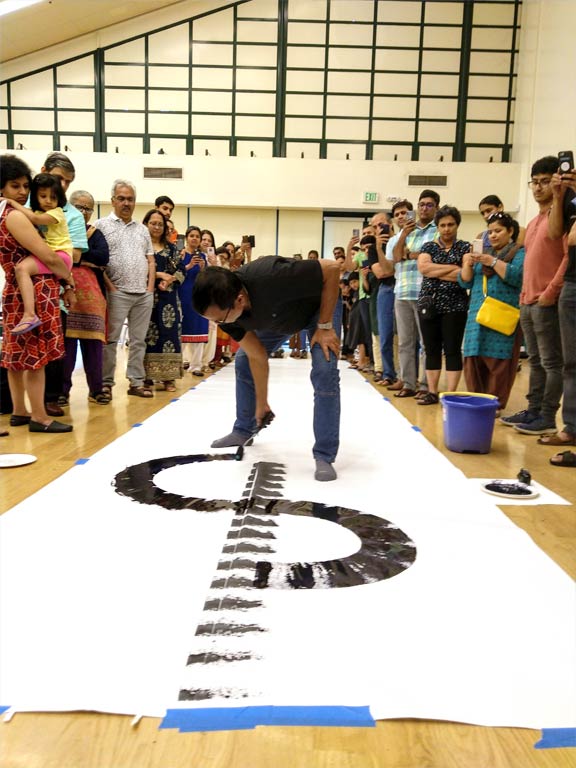 Another highlight of his tour was the visit to the ‘Letterform Archive’. He had the opportunity to meet and discuss scripts and calligraphy with curator and publisher Mr. Rob Saunders. Mr. Saunders has a collection of over 50,000 books on calligraphy, typography, jewelry, photography etc. The Letterform Archives is visited by many artists, researchers and scholars. There are no fees charged for visits to the archive. Achyut Palav has pledged to donate books, manuscripts and old samples of Indian calligraphy and handwriting to the archives so that visitors can also study Indian Calligraphy. Achyut Palav expresses his content and happiness on the successful trip that not only allowed him to take Indian Calligraphy to the people in San Francisco but has also proved to be a great learning experience.

Disney+ Hotstar VIP to release first look of war-epic titled 1962: The War In The…