Alia Bhatt and Vicky Kaushal starrer Raazi has impressed the audience and is doing a great job at the box office. The film has minted a whopping amount of Rs. 207 crore worldwide. Raazi has been collecting huge numbers since its release and the good word of mouth is adding more to its glory. Alia has outshone herself in the film and has come a long way since Student Of The Year.

Raazi, directed by Meghna Gulzar released on May 11. It’s been 6 weeks and the film is still running strong on the theatres. The female-oriented film has definitely made the team of the film very proud. 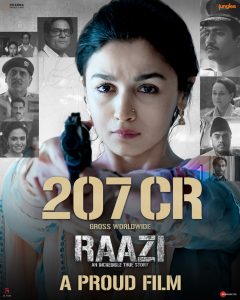