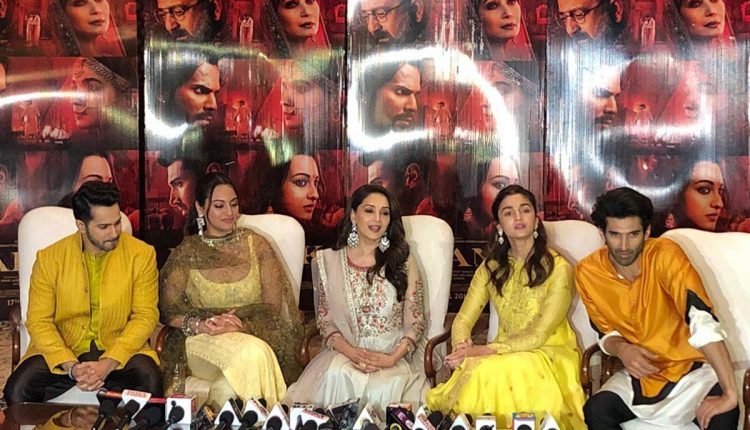 Alia Bhatt, Varun Dhawan, Madhuri Dixit, Sonakshi Sinha and Aditya Roy Kapoor, who came to promote his film Kalak in Delhi’s CP. Where everyone talked about the film, as well as shared their feelings associated with the film with the media.

The Kalank is a highly-anticipated upcoming period drama of 2019, directed by Abhishek Verman. The film is produced by Karan Johar and Sajid Nadiadwala under the banner of Fox Star Studios. Madhuri Dixit, Sonakshi Sinha, Alia Bhatt, Varun Dhawan, Aditya Roy Kapoor and Sanjay Dutt are in the lead role, the film will be released in cinemas on April 17, 2019.

In this film, before a self-restraint, the story of a joint, family is shown, in which many secrets are hidden. In the film, the triangle of love has been shown between the form (Alia), Zafar (Varun) and Dev Chaudhary (Aditya). This is where the story of love and change of the film begins. The creature does the zaver, but for some reason only he does marry Dev Chaudhary. While God is already married, but after marrying Roop Dev, he continues to drink. In the rest of the film, the pictures of these three people have been shown. A Hindu-Muslim dispute has also been shown in the film about this relate between two Hindu-Muslim families.