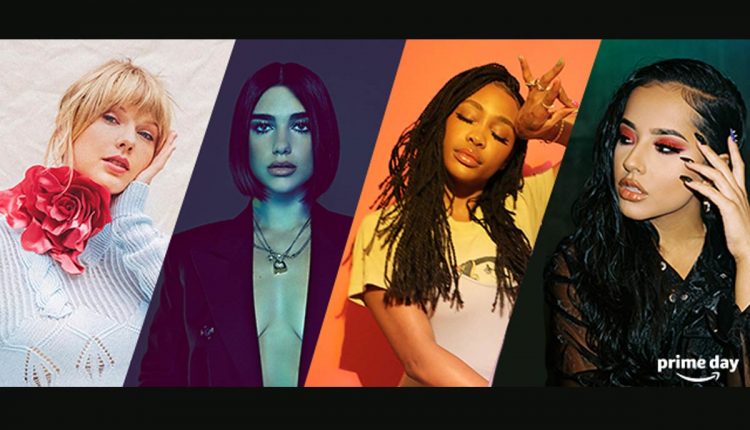 Amazon Music announces that 10-time GRAMMY Award-winning artist and one of the most influential artists of our time, Taylor Swift, will headline the Prime Day Concert on July 10 (ET)/11 (IST), 2019, streaming live on Prime Video at 6.30 am IST in a first-of-its-kind event that celebrates the best in Amazon entertainment, exclusively for Prime members. The Prime Day Concert presented by Amazon Music will provide an unforgettable experience for members worldwide with an evening of additional performances from chart-topping artists including two-time GRAMMY Award-winning artist Dua Lipa, multi-award-winning artist SZA, and global superstar Becky G. Hosted by award-winning actress Jane Lynch (The Marvelous Mrs. Maisel, Glee), the Prime Day Concert presented by Amazon Music will be available to Prime members to stream on-demand after the live show for a limited time on Prime Video, which will include select songs from each performance. For more details on the show, and to add it to your watch list, head to primevideo.com/primedayconcert.

View the trailer for the Prime Day Concert presented by Amazon Music here.

“We can’t wait to celebrate Prime Day with an extraordinary night of unforgettable performances, for members around the globe,” said Steve Boom, VP of Amazon Music. “Prime Day brings members the best of both entertainment and shopping. To celebrate, we’ve curated a lineup across multiple genres with performances from artists our customers love. We’re looking forward to celebrating Prime Day with this can’t-miss, one-of-a-kind event.”

Watch it live, around the world

Prime members streaming around the world will enjoy a front row seat to watch the Prime Day Concert, streaming live on Prime Video in more than 200 countries, and available to watch the next day on-demand for a limited time. Prime members streaming the Prime Day concert will get a taste of Carnival Row, the upcoming Amazon Original fantasy drama starring Orlando Bloom and Cara Delevingne, along with never before seen clips of Modern Love, an upcoming romantic series based on the popular New York Times column of the same name. Viewers will also see clips of Prime Video favorite, the Emmy Award-winning The Marvelous Mrs. Maisel and Tom Clancy’s Jack Ryan, ahead of their new seasons, in addition to exclusive clips and teasers of upcoming Prime Video releases including edgy superhero drama The Boys, new animated series Undone, from the creators of BoJack Horseman, and brand-new stand-up comedy specials.

During the Prime Day Concert presented by Amazon Music, fans will witness a lineup of chart-topping artists, and special moments including:

Amazon will provide Prime members worldwide the chance to get epic deals for its longest Prime Day ever. Now in its third year in India, Prime Day starts at midnight on Monday, July 15 and – for the first time ever –runs for 48 hours, offering members two full days of the best in shopping, savings and entertainment. Prime members will enjoy the best deals with Amazon’s lowest prices of the year, over 1,000 new product launches and never-seen-before entertainment.

Gulshan Nain Talks About New Web Series Only For Singles