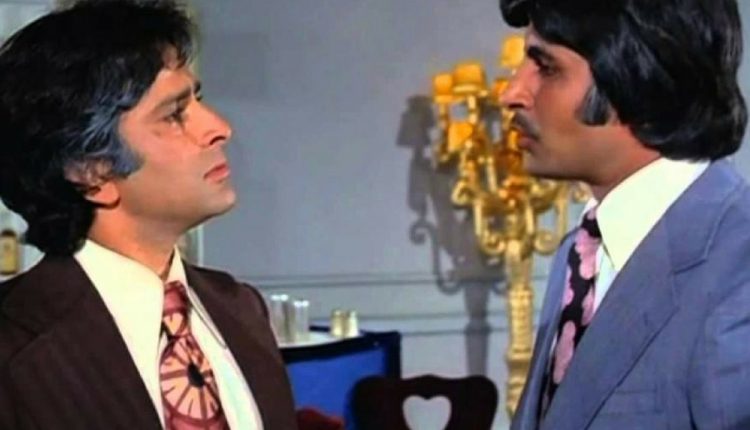 It was yesterday that the film fraternity went upside down with the sad news coming our way that the legendary actor from the first family of Bollywood, Shashi Kapoor passed away. Amitabh Bachchan and Shashi Kapoor was always known for their friendship and their bond off the screen. From Kapoor’s iconic dialogue ‘Mere Paas Maa Hai’ in Yash Chopra ‘Deewar’ or their iconic jodi in ‘Suhaag’, ‘Kabhie Kabhie’ and ‘Namak Halal’, they have seen the stardom altogether.

With 12 odd films together, Amitabh Bachchan has shared the closest relationship with his ”samdhi’ and co-star. Shashi Kapoor passed away on Monday but Amitabh Bachchan didn’t have the courage to pay his last respect. . Big B did not go to the hospital even when told of his friend’s death.

In an emotional tribute to Shashi on his blog, Bachchan wrote, ” I never ever wanted to see this beautiful friend and ‘samdhi’ in the state I saw him in hospital .. …. and I did not today, when they informed me that he had gone …” Talking about the charming ways, Big B still remembers his warm and friendly self introduction: Shashi Kapoor !” was what one heard as he extended a warm soft hand out to you in introduction ; that devastating smile complimenting the twinkle in his eyes. He needn’t have done so. Every one knew him. But this was his infectious humble self. When he spoke, there was a mischievous, gentle, almost inaudible, delicate, yodel, in his voice – most endearing and comforting to the one he was introduced to. The self introduction habit, was a gem. The one being introduced to, was, quite obviously, prompted to say his or her name as well, when they heard his. It was a remarkable tool to come to know the other persons name .. and .. if and when there was to be another meeting after many forgettable years, the same technology was most helpful in remembering the other persons name, in case you had forgotten it .. !!”

Not just this Big B even revealed that Shashi Kapoor’s stylish ways inspired him to get a new hairdo. “His semi curly hair on head, falling carelessly over his forehead and ears, not quite covering it .. and my upper story mumbled again : ‘hey ! maybe you should think of covering your ears as well ..’ … and off I went to Hakim the hair dresser at Taj Hotel with my plan .. and executed, it remained till date ..” Big B even revealed how his health deteriorated after his wife Jennifer Kendal’s demise.” He had been ailing .. somewhere he had let himself go after the passing away of his dear wife Jennifer,” wrote Big B.

Well, it’s such an emotional letter to the man who deserve it all.

Team Bollyy wishes the family strength and courage. Our prayers are with them! Rest in peace, sir.

SUNNY LEONE IS THE MOST SEARCHED CELEBRITY, YET AGAIN!