Sunday Darshan from Amitabh Bachchan’s house is back as the living legend was back to greeting fans outside his Juhu home. In the last few weeks, the actor’s ill-health and shooting schedule had kept him away from following the Sunday ritual. 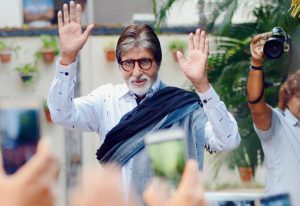 In his blog, Amitabh Bachchan said while “repair” work for his body pains has been on, he feels one’s own efforts work best for improvement in health. “Repair on the pains for body do continue… But at times it has been seen, noticed, that the efforts of the self are and be the best cure for all… hence an effort made to be back on routine,” the 75-year-old posted on his blog.

Earlier this month, the actor was shooting for Thugs of Hindostan in Jodhpur, where a team of doctors flew in to check him as heavy costumes for the period drama took a toll on Big B.

IT’S JUST THE BEGINNING OF ALIA BHATT AND RANBIR KAPOOR?