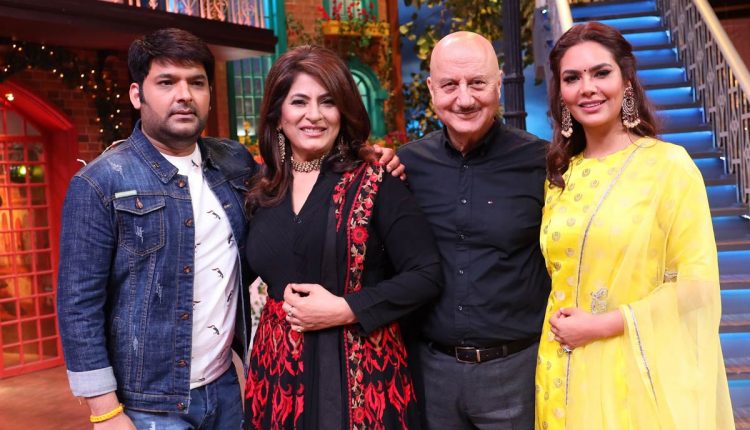 The upcoming episode of Sony Entertainment Television’s The Kapil Sharma Show will see Bollywood veteran actor who has made his mark in the Hollywood industry; Anupam Kher along with the beautiful looking Esha Gupta. While many young actors keep fitness as their priority, one should not ignore the fact that actors who are in their late 40’s and above are also maintaining themselves. They do it with so much seriousness that the actors of today will have to run an extra mile to achieve the same.

During the show when Kapil asked Anupam Kher to reveal his fitness secret, the actor says, “I continuously started hitting the gym after I turned 60. My focus has always been on reinventing myself from time to time and stay fit and fresh.” The actor who has lost 15kgs of weight just by walking shared how he used to visit his best buddy Anil Kapoor’s residence to exercises. He shared, “Anil Kapoor has a private gym in his house where I used to go and exercise while Anil used to go at another place to exercise. Also, I don’t need any motivation to gym like aura, music, etc. I am a very self-motivated person and enjoy hitting the gym alone.”

Later in the show Anupam Kher mentioned that he is currently shooting for an International series in New York but, he doesn’t understand the his co-stars English accent fluently as he completed his education from a Hindi medium school. Hearing this Kapil humorously added, “Even I don’t understand foreign accents as they speak fast and in one flow”.

Further in the show, Anupam Kher will be seen reliving ‘Kuch Kuch Hota Hai’ where he will be seen imitating, ‘Mr. Malhotra’ and Archana Puran Singh will imitate, ‘Miss. Braganza.’ Moreover, he will go on disclosing some more hidden facts of the casts from the film which will take the conversation to a humorous level.