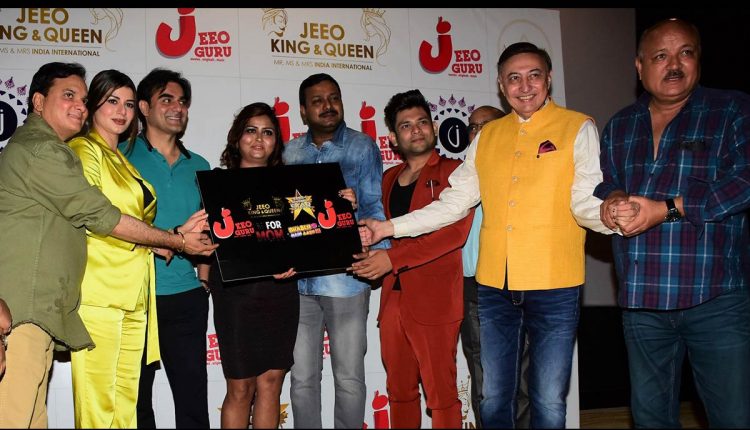 Jeeo Singing Star is a new talent hunt where the youth and the multi-talented from all fields of entertainment, whether it is music, feature or short films, are encouraged to participate and prove their mettle. Jeeoguru’s Soumyajit Ganguly and Sukanya Gupta averred, “In our constant endeavour to find new talents, we are organising a music talent hunt program where the participants need not stand in a queue for the auditions. They could just subscribe to the app and upload their songs.” After the various aspects of judging and factoring in the votes of the judges, the final 24 participants would be hand-picked where they will perform live in front of Chief Guests – Actor Arbaaz Khan and Music Composer Lalit Pandit. That’s not all, Meghna Mishra and Abhay Jodhpurkar would play mentors to the contestants while the entire show will be hosted by singer Aneek Dhar.

Jeeo King And Queen, unlike other reality shows, also incorporates a beauty pageant. Organized by Jeeoguru, there are 3 categories for this reality show, Mr, Miss, and Mrs. On this offbeat glamour hunt, the app owners mentioned, “We don’t believe in so called external beauty. Hence, colour and shape of the body isn’t important. What’s important is their inner beauty and the language they speak and nothing else would not be a barrier to their success.” Actors Arbaaz Khan and Kainaat Arora will be the Chief Judges of the reality show.

M For Mom, a familial web series focusing on a unique mother-son relationship where the son hates his mother but is very close to his fathers’ office colleague. She is the only person who is there beside him in his loneliness. To know why he hates his mom and where does the hate takes them you have to watch it. Starring actors Joy Sengupta, Sayantani Ghosh, Piyali Munsi and Krish Gupta, M For Mom is directed by Jiit Chakrobarty and assisted by Sabysachi Mandal, while the story concept and creative direction is by Sukanya Gupta. The show gets its music from Pinaki Bose.

Bhabiji Main Aaun, another offering of Jeeoguru entertainment app saw its trailer and music launched in the presence of celebrities and dignitaries. A Bhojpuri item number, ‘Bara Baje Aana’, a track voiced by Priyanka Singh while the music composed by S Kumar, followed by one hindi peppy number called ‘Nachenge Saari Raat’, sung and composed by Bengali rapper Tanmoy Saadhak, were released at the celeb studded event. The story, screenplay and the direction by Soumyajit Ganguly brings about a fresh comedy, purely for entertainment, where two young bachelors are attracted to a young married ‘Bhabhiji’. Through the twists and turns, the story turns to an unexpected end. That is not all. For the first time, Seema Singh – the famour Bhojpuri item queen, is doing a full fledged web-series with Prem Singh and Areya while the voiceovers are by Arun Bakshi.

Allowing customers to watch a wide variety of web-series, movies and exclusive shows, Jeeoguru announced a special subscription plan where the subscriber could stream all the media of the app for a nominal subscription fee of just Rs 79 for an entire year. Be it drama, horror, suspense, thriller or comedy, Jeeoguru has it all! The Jeeoguru application is available on iOS on the App Store and Android on the Google Play Store.

It’s Raining Legends, And For Me It’s Like Dream Come True – Ranveer Singh On Star Sports

Unveiling Of Maharajah Moustache Wax At The Cosmoprof Expo