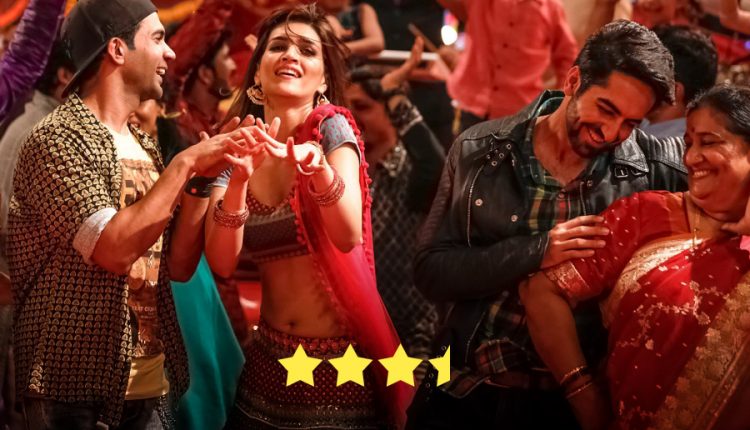 The second half of 2017 might just make up for all the disasters Bollywood had to face in the first half. After last week’s Toilet: Ek Prem Katha, we have yet another film you wouldn’t mind spending your hard earned money on. Bareilly Ki Barfi comes across as the perfect breath of fresh air and if your favourite genre is ‘rom-com’ then you should be booking your seats before you finish reading this sentence.

Ashwini Iyer Tiwari knows exactly what makes a rom-com a good and memorable one. She adds all the ingredients in just the perfect quantity—some sugar, much spice, a dash of drama and of course emotions. Bitti(Kriti Sanon) is an atypical girl from Bareilly who works with the Telephone Department, likes her share of smokes, watches a whole load of English films in which, according to her ‘I am breaking up with you’ means ‘Hum aapko todna chahte hain‘. She’s been rejected by quite a few prospect grooms because she is simply too cool for a girl living in Bareilly. Fed up with all the rejections and her mother’s constant taunts, she decides to elope. While waiting for the train to arrive, she decides to get herself a book and that book eventually decides the fate of all the three protagonists in the movie. Chirag Dubey (Ayushman Khurana) is a jilted lover who has written the book as an ode to his past relationship while Pritam Vidrohi (Rajkumar Rao) is that boy of the class who’s bullied by everyone because he’s too set to be real. How and what roles the three characters play in each other’s lives is something that you’d have to find out on your own because we don’t want to let the cat out of the bag completely.

With Javed Akhtar’s narration in the background, the film got us hooked from the very first frame. The film starts cracking you up from the very first scene when Kriti’s parents played by Pankaj Tripathi and Seema Pahwa are having a typical husband-wife conversation. We cannot imagine the film being made without them; they are on fire and irreplaceable! Pankaj Tripathi’s conversation with the fan and Seema Pahwa’s constant lookout for the perfect groom is not just hilarious but also are some of the best parts of the film. Kriti looks her gorgeous self and as far as her acting is concerned, for about half an hour in the film she is seen carving a niche for herself and she just gets better with time. Ayushmann Khurrana plays the role of a quintessential ‘stud’ and excels in this one. Rajkummar Rao is the show stealer and the charm of the movie resides in him. How he transforms his character is mind-boggling; he’s gift to the Indian Cinema indeed.

It might be the ‘same old love story’ but it’s the narration that makes it endearing. Nitesh Tiwari and Shreyas Jain know exactly what the audience wants to see and of course, they haven’t disappointed us. The characters are raw and it’s the nuances and tiny details that make the story captivating. Ashwini Iyer Tiwari knows how to bring out the best from every single character and while there are interstices where the movie seems a tad bit slow paced but we shouldn’t be cribbing about that because the film doesn’t fail to do what it’s meant to and that is, Entertain us.

The music blends so well with the film that you fall more in love with it while you’re watching it. The dialogues are written with utmost wit and passion and that reflects throughout the movie. The climax though is not entirely unpredictable but it keeps you hooked to the film till the very end. So, if you have been disappointed with a few releases in the past that failed to deliver what they promised, you need to go watch this film because it will leave a smile on your face and of course, that’s a precious thing to keep!