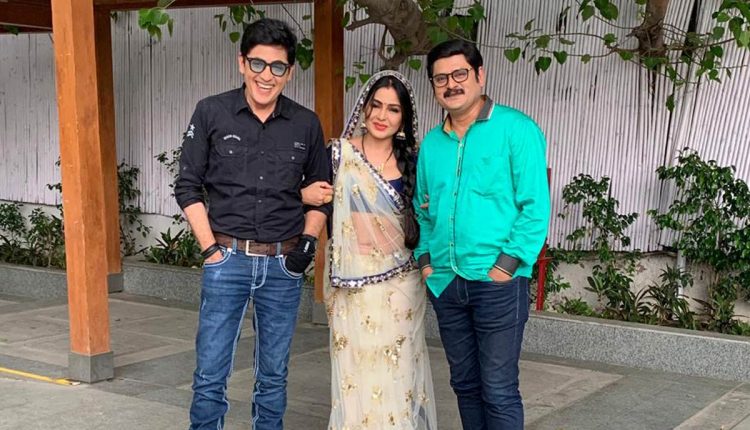 The cast members of the TV show Bhabiji Ghar Par Hai produced by Sanjay Kohli and Benaifer S. Kohli for & TV ! got a respite from the Mumbai rains for a day, when they visited Delhi last week. Shubhangi Atre, who plays Angoori Bhabhi in the show, said, “This is that time of the year when even our make-up rooms are leaking but we are used to shooting in such conditions now.” Echoing the sentiment, Rohitashv Gour, who plays Manmohan Tiwari, said, “Humein toh aadat ho gayi hai koodte phaandte set par pahuchne ki.”Aasif Sheikh, who plays Vibhuti Narayan Mishra, on his part, said that when it rains cats and dogs in Mumbai, he has to suffer a lot since he has to travel 50km one way to reach the sets. “When you are shooting for a daily show, you first have to think of ways to reach to the set the minute it starts pouring. Since I have to travel so much, I have come up with a solution for the time when roads get choked and it becomes impossible to commute. After completing a day’s shoot, I stay in a hotel across our studio.”

The trio was in Delhi to meet their fans and talk about the show. Unfortunately for the fans, Saumya Tandon, who recently returned to work after having a baby, was not able to travel to the capital. “It’s difficult for her to travel even for a day as she is taking care of her child,” Aasif shared.The actors also mentioned some interesting off-camera titbits with their fans. For instance, Rohitashv is popular as Buddha on the sets since he is always calm and patient, being a trained classical dancer, Shubhangi choreographs all dance sequences in the show, and before talking to Saumya, one has to make sure that there is no body odour and hands are perfectly clean.

Talking about their characters on the comic show, Rohitashv said, “I think what makes this show popular is the way it is written. Some phrases like ‘ghuiya ke khet mein’ and ‘arre pagli’, which are commonly used in the show, are a part of the way people talk in Kanpur.”Aasif added, “Also, the audience can connect with the characters. We all have such people in our families, friend circle or in our neighbourhood. Like when I was growing up, there was this guy in my neighbourhood. He was handsome and a favourite with the women, but whenever he would pass by, my mother would say, ‘Kamata kuch nahi hai yeh!’ So somewhere, he is the inspiration for the character that I play.” Concluding on a lighter note, Shubhangi said, “I think the show is popular because a lot of people these days are unhappy with their respective partners.” Producer Duo Sanjay and Benaifer S. Kohli surely knows the pulse of the audience and Sanjay Kohli is often called the king of comedy in the TV industry.

Witness The Tale Of A Courtesan, Umrao Jaan Ada, Live On Stage From August 3rd At JLN Auditorium, Delhi