Today is Bhumi Pednekar’s 31st birthday. Though I have never even once interviewed the actress par excellence till date ever since she had made her debut with Dum Lagake Haisha six years ago, I have been meeting her on and off during various interactions of the promotion of her films, to celebrate her birthday, write an article on her by culling her various quotes during the last six years and wish her a happy birthday on behalf of bollyy.com and Mayapuri

Bhumi Pednekar who used to have a hectic work schedule consisting of shoots, promotional travel and working insane number of hours, says she has learnt to disconnect and focus on herself, thanks to the pandemic now. Bhumi Pednekar was used to at least two to three films of hers releasing every year and shooting about the same number of projects every year since she had made her debut in Bollywood with her breath-taking acting in Dum Laga Ke Haisha. With the pandemic forcing us to stay at home, Bhumi says she has loved being by herself and has focused on things that constantly make her happy.

The actress has gone on record sometime back. ‘One thing that I have learnt about myself is that I love isolation. I love being by myself. I have seen a lot of people complaining that they are bored at home or that they cannot go out. I am an extrovert, I am a very social person but this quarantine has led me to realize that I do prefer my isolation over meeting people because I haven’t really been in touch with people. I have kind of been catching over my reading, not seen much television but started watching shows. I have spent a lot of time with my mom and honesty when there were days when I did nothing.’

Bhumi says self-love is the key to happiness and ‘I have loved being by myself’: Bhumi Pednekar has prioritized herself in this lockdown. She says, ‘I have kind of prioritized what I feel is important in life. I have re-educated myself. But the biggest learning has been that I love being alone. And maybe I have kind of enjoyed this state because as actors you are constantly surrounded by people whether you are promoting or shooting a film. Your immediate entourage is also like a team of quite a few hand-picked people. You are constantly over the phone; you are constantly over social media.’

Bhumi Pednekar’s fitness is something that is talked about regularly as the actress had stunned everyone with her body transformation both before as well as after Dum Laga Ke Haisha. She is a gym-junkie and is extremely conscious of what she eats. The lockdown imposed in India due to coronavirus has resulted in health and fitness challenges for everyone and Bhumi is not at all an exception to the rule but Bhumi has a solution for it.

“I have always strived to lead a very balanced lifestyle and believed in the synergy of how nutrition and what we eat directly impacts our health as well as fitness. This lockdown, though extremely challenging for all of us because it has changed  how we live life and exist, is also impacting our minds and that can throw off diet and nutrition in a big way”, she exults. Bhumi adds, “What we set out to eat has a lot to do with how we feel-it’s interconnected and also mostly emotional. This will create health and fitness issues and I want to share with everyone my nutrition journey through COVID-19 and I hope that people will find this useful.”

The actress has maintained a routine and what’s more, also stuck to her nutritious way of life all through the corona virus pandemic. She credits her nutritionist Dr Siddhant for her fit body and has also done live chats with him to share her knowledge of health as well as nutrition tips with everyone.. “I have ensured that I am mobile. I have been working out and also am on a nutrition rich diet and have not resorted to binge and junk eating. My nutritionist is a genius and has a wealth of vast knowledge which has helped me shape my life fruitfully. I want him to share his knowledge with as many people as possible because he has kept me going despite the lockdown challenges,” she says

“I’ve been brought up with a lot of compassion and just general awareness since I was very little,” Bhumi has gone on record, adding that what she missed out on in Mumbai she enjoyed heartily in her grandparents’ Jaipur farmhouse. “My grandmother had hundreds of trees and everything was homegrown. I’ve spent a lot of time up close with nature. I realized how important it is to coexist with nature.” She pointed out how a lot of environmental practices like composting and garbage segregation aren’t new concepts and in fact find their roots in Indian villages. Despite being a complete Mumbaichi porgi, she credits her parents for talking about the changes the world needs to see, which led to her relentless work as a Climate Warrior today”. 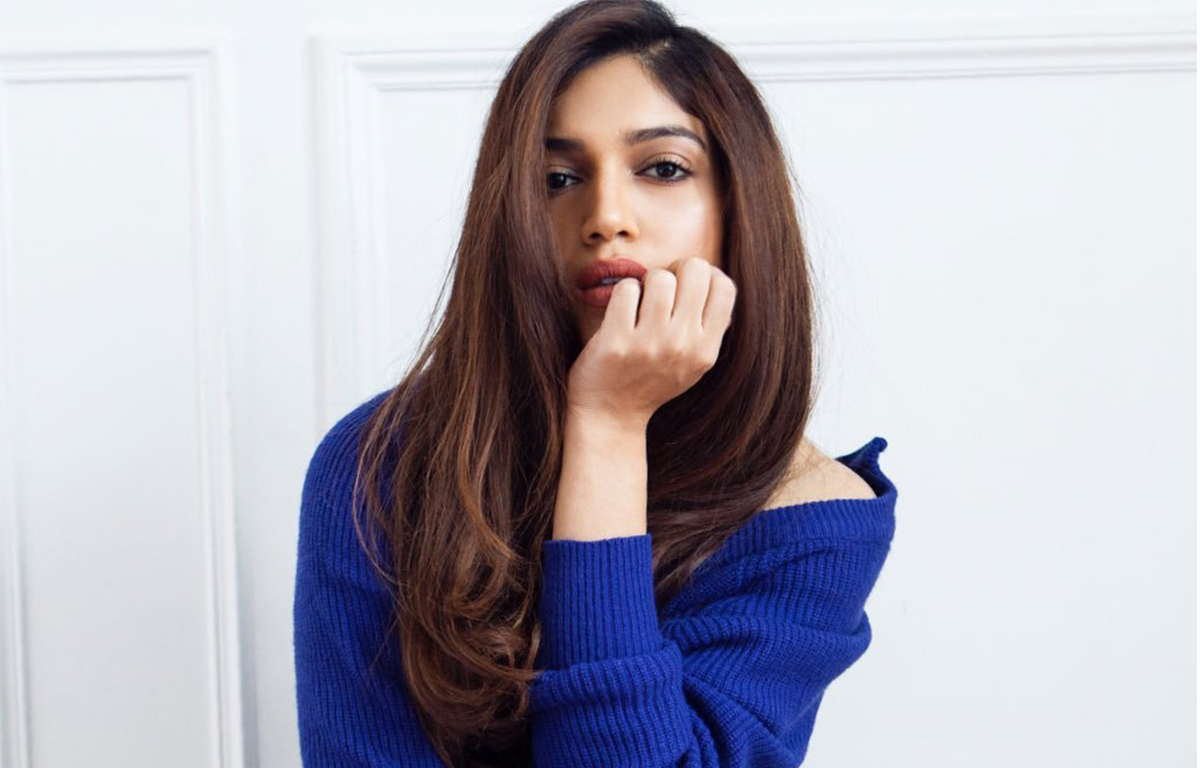 6 film old young but highly acclaimed actor, Bhumi Pednekar, has been a part and parcel of most of the commercial film of her career like Bala, Saand Ki Aaankh, Dum Lagake Haisha, Pati, Patni Aur Woh etc and it seems like she has been inspired a lot by Karisma Kapoor’s outstanding act in Biwi No 1! Bhumi confesses that she has always been a huge fan of Karisma, who had wowed the nation with her breath-taking beauty in all her films.Says  Bhumi, “I have been a huge fan of Karisma Kapoor since I was a child. I even bought a dress that was similar to the one she wore in Raja Hindustani. For me, she is the epitome of a commercial film heroine and I have seen and loved her films.“

Bhumi continues unabated. “A fabulous actor, she was outstanding in comedies and Biwi No 1 was a huge inspiration for me while I was preparing myself for Pati , Patni Aur Woh. Karisma as a simple bahu to becoming the firecracker in the film had bowled me over and she has been my most definitive reference point to nail my role in Pati Patni Aur Woh.”

Bhumi says she is thrilled to play a character so similar to Karisma’s in Biwi No 1. “It’s a dream come true for me to play a role that is so strikingly similar to hers. I thoroughly enjoyed playing the commercial film heroine for the first time in my career and I realized my childhood wish in the process,” she says. Can you believe it; Bhumi Pednekar even refuses to do rain scenes in her films in an attempt to save water. Another step in this direction is Bhumi’s most recent initiative ‘One Wish for the Earth’ that aims at engaging youth across India to be more conscious of the climate and environment. She believes that while she has been doing her small bit for the environment very early on, now she has the power as an actor. “People care about what I have to say, they listen to me, I have better connections with people that can influence young minds because by the end of it the youth is our future,” Bhumi says, and asserts that for several years she has engaged in activities with children and youngsters who, she believes, are the future of the planet.

Bhumi has also gone on record saying, “I really hope that next year, this time, we again have this live session but the world is a better place. I don’t want to scare anyone, but the more I realize that the planet might not be inhabitable in the near future, I don’t see myself having a family! I confess that I often feel alone as people only saw me as an “activist”, something I believe everyone needs to become. But despite all this, I find that meeting others who care just as much helps me feel at ease”.

I DON’T DENY I’VE HAD RELATIONSHIPS IN THE PAST”