DID BOLLYWOOD CONFIRM THE RUMOURED RELATIONSHIP OF ALIA BHATT AND RANBIR KAPOOR?

Ranbir Kapoor and Alia Bhatt will be seen opposite each other in Ayan Mukerji’s Brahmastra. There have been rumors of the two dating for a long time, though there is no official confirmation as of now. Both Alia Bhatt and Ranbir Kapoor have dodged the question of their potential romance brewing between the two.

However, the rumors have started doing the rounds again as Ranbir and Alia entered Sonam Kapoor and Anand Ahuja’s reception together and posed for media. Alia also put up a picture of the two on her social media handle.

The post was loved by the fans and also from the B-Town which indicated that the couple might be dating. Here is how Bollywood reacted; 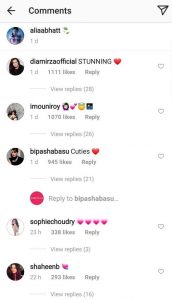 Is this an indirect confirmation of their relationship?

NEHA DHUPIA AND ANGAD BEDI TO HOST A PARTY IN MUMBAI

ANIL KAPOOR THANKS POLICE AND MEDIA FOR SUPPORT