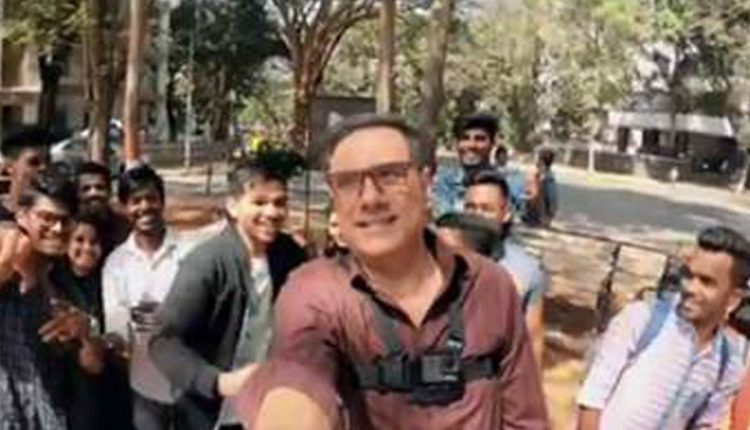 Boman Irani Does A Fun Shoot In Mumbai!

Celebrated actor, Boman Irani, who will next be seen in Made in China alongside Rajkummar Rao and Mouni Roy, was seen doing a fun shoot in Mumbai, while taking a break from his hectic shoot schedules. More on his fun day in the city as below.

If Boman Irani’s Instagram posts are anything to go by, the celebrated actor is having a pretty eventful and fun-filled trip across the globe!

But before the actor went jet setting, he seems to have caused quite a furor in his neighborhood, as seen in a recent post here –

Hey! So, I did something fun and it’s time I share with you now! Watch this really cool #GoProGuessWho video that I did with #GoProIndia! And guess what, you can be a part of this craze too! Just follow @goproin on Instagram and create a funny one liner using the word “GoPro” + one of my movies in the comments section of this post! What do you get, you ask? Well, one lucky winner takes home a #GoProHERO7 camera and five other lucky winners stand to get GoPro swag t-shirts and pop socket signed by me! The winners will be declared on Monday, the 29th! Also, don’t forget to tag your Bollywood deewane friends! The giveaway ends Sunday midnight, so come on hurry!

The actor is seen sauntering the by lanes of his neighbourhood, a GoPro strapped onto his self, capturing the world and the surprised expressions of his fans, as seen through his eyes.

The video begins by giving viewers a glimpse of the confines of the Bollywood star’s home – look closely and you will see a hand drawn sketch of one of Boman’s most popular characters, Virus, from the Bollywood superhit, 3 Idiots; holding a place of honour on his desk.

The talented actor, known and loved for his wide range of characters such as the suspicious Dr. Ashthana in Munnabhai M.B.B.S to the bumbling Principal of Main Hoon Na, seems to be a huge movie buff himself, with an enviable collection of DVDs as seen in the video. But no blockbuster can take the spot of popular kid’s cartoon, Peppa Pig, that Boman is seeing watching, with his adorable 3-years old grandson, Ziaan!

The actor’s love for his dogs, a wee beagle and a golden retriever, is apparent as he takes them on a walk, only to be accosted by his fans. Ever the gentleman, Boman indulges his fans, taking selfies with them, signing autographs and even filming them using his GoPro camera.

To follow all of Boman’s antics and dive deeper into his live away from the big screen, watch the entire video here.

Hey #GoProFamily! Here's a little something to boost your morale + brighten your Monday… • #GiveawayAlert How to participate: 1. Watch the full video. 2. Guess who it is in the video behind the camera and tell us in the comments below. 3. One grand prize winner will take home #GoProHERO7 Silver + signed #GoPro Swag (tshirt, pop-socket) 4. Five other lucky winners will take home signed GoPro swag (tshirts, pop-sockets). • Giveaway ends on Thursday, the 25th at midnight. Winners (one grand prize winner + five lucky winners) will be announced on Friday on our Instagram Stories. Applicable only to residents of India. • #GoProIndia #GoProGuessWho #MondayBlues • UPDATE: This giveaway is now closed. Winners have been announced and reached out to via DMs.

The Bollywood actor will next be seen in upcoming film, Made in China, alongside Rajkummar Rao and Mouni Roy.