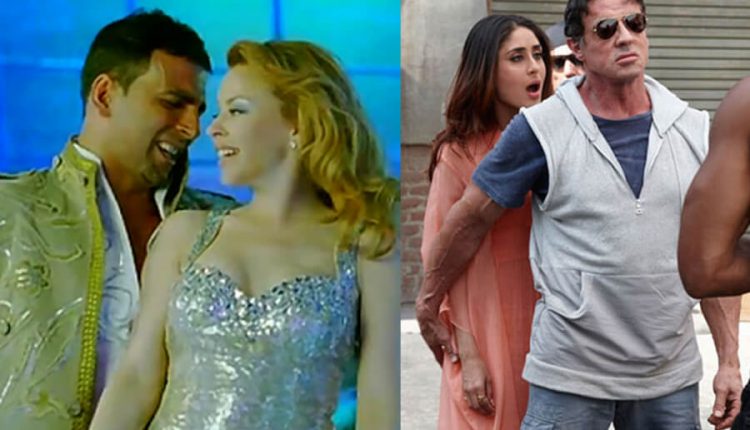 Priyanka Chopra and Deepika Padukone’s recent stint abroad is enough to convince us that desi stars jump at any chance of giving Hollywood a shot. But, guess what? This crossover-keeda is not just one-sided. The colours, flamboyance, song and dance routines in Indian cinema attract actors from foreign film industries. We are in an era where actors around the world share screen space without objection or conflict. The most recent example of this would be Chinese actress Zhu-Zhu’s cameo in Salman Khan’s Tubelight. While, for the rest, here’s a list of some of the most memorable cameos by foreign actors in our very own masala films.

Rebecca Breeds is an Australian actress who is famous for her roles in various TV series like New Castle, Blue Water, Home and Away and We Are Men. The actress played Farhan Akhtar’s love interest in Bhaag Milkha Bhaag. Their chemistry bagged full points from critics and was considered one of the many things to watch out for.

Denise Richards is an American Actress known for roles in Starship Troops, Wild Things, The World Is Not Enough and others. She played Akshay’s love interest in the movie. Akshay’s pretend-Casanova style, and cringeworthy American accent along with the lack of chemistry with the actress just didn’t seem to work. Despite that, however, Denise was quoted as saying that she had a good time filming with Akshay and also called him a “good kisser”.

While it’s a crime that a legend like Sylvester Stallone made his Bollywood debut with Kambakht Ishq, we have to understand we can’t always get what we want. The Rocky and Rambo star appeared in the film randomly in a fight sequence.

A set up that had the potential to fill the every movie theatre in India sadly wasn’t even able to get close to our expectations and failed miserably. Two legends, Amitabh Bachchan and Ben Kingsley sharing the screen together in a Bollywood movie is something a film buff would die for. The movie was about a mathematics professor (Amitabh Bachchan) who tries to use probability in the Indian card game of Teen Patti to make some moolah. Sounds like the story of Hollywood movie 21. Both the actors gave great performances, but weak premises and the predictable plot made it for a great actor’s horrible introduction to Bollywood.

Sarah Thompson is an American Actress best known for her role in Cruel Intentions 2. She has also acted in films like Baby Sitter Wanted, Pink Conspiracy, and A Nanny for Christmas among others. The actress made her Bollywood with political thriller drama Rajneeti in 2010 as Ranbir Kapoor’s love interest and we couldn’t help falling in love with her character and their chemistry as a couple.

5. Kenton Duty, Katie A. Keane, Benny Nieves and Christopher B Duncan in My Name is Khan Kenton Duty (left) is an American actor, dancer, and singer who is famous for his role of Young Jacob in the TV series Lost. He has acted in several films like Little Savages, Forget Me Not, Shake It Up etc. On the other hand, we have Katie A Keane (right) who has acted in films like Hell to Pay, Protecting the King etc. Both the actors played mother-son under the names of Sarah and Reese Garrick in My Name is Khan.

Benny Nieves (left) is a small-time Hollywood actor who has payed roles in films like  actor Hot Pursuit, The Devil’s Advocate, Double Take etc. The actor has played Detective Garcia in My Name is Khan.

Christopher B Duncan (right) is an African-American actor best known for his role as Braxton P. Hartnabrig in The Jamie Foxx Show. He has also played the lead in the sitcom The First Family. Apart from that, Duncan has acted in several films like Original Gangstas, The Congress, Ticket Out etc. He played the role of President Obama in the SRK-starrer.

During the time of its release, it was declared as the most expensive movie in Indian Cinema; made with a budget of 110 crores. Although, the film itself was a train-wreck, the song Chiggy Wiggy featuring Kylie Minogue as herself was widely appreciated by the audience. Akshay’s performance in the song was quite hilarious and over excited. But being the legend that Minogue is, she could definitely have made a better entry in Bollywood rather than acting in an item number.

7. Snoop Dogg in Singh in Kinng

Barah Aana is a comedy-drama that released in 2009, starring Naseeruddin Shah, Tannishtha Chatterjee, and Vijay Raaz in lead roles. Violante Placido played a small role in the film and her character was called Kate. Placido is an Italian actress and singer, who has had some memorable performances in Italian and American films. She was also a part of the Transporter series and she has played Nadya in Ghost Rider: Spirit of the Vengeance.

9. Brande Roderick in Out of Control

Brande is an American actress and model, who is famous for her appearances in Baywatch and Playboy.  She also plays a role in the show on the current US President Donald Trump, called The Apprentice.  She has also made appearances in several other films like Starsky & Hutch, Hood of Horror, Club Wild Side 2 and The Nanny Diaries. She made her Bollywood debut with the disastrous Riteish Deshmukh-starrer Out of Control, where she played the actor’s love interest.

Paul Blackthorne is a pretty well-known face in Hollywood. He has played Detective Quentin Lance in three different series—The Arrow, The Flash, and The Legends of Tomorrow. He’s also shared quite a lot of screen time with Brandon Routh, another actor on our list. Blackthorne played Captain Andrew Rusell in the Oscar-nominated Bollywood film Lagaan, starring Amir Khan in lead role.

Alice Patten was seen and loved in Rang De Basanti for her role as Sue McKinley. While it was a memorable role, the actress was never seen in any other Bollywood flick. Patten is famous for her roles in several films like The Last King, Trade Routes, and The Forsyte Saga among others. The actress is the daughter of a prominent politician Chris Patten, who was also the last governor of Hong Kong, before China took over the city.

IS BOLLYWOOD FINALLY MOVING AWAY FROM MASALA FILMS TO MORE SENSIBLE CONTENT?

HOLD YOUR HORSES AS SALMAN KHAN & EMRAAN HASHMI MIGHT JUST DO A FILM TOGETHER!