CELEB OF THE MONTH: 5 REASONS WHY ANUSHKA SHARMA IS A BRAND IN HERSELF!

An outsider girl who entered in Bollywood with her debut role of Tani Partner in 2008 hit film Rab Ne Bana Di Jodi opposite the King Khan of Bollywood Shahrukh Khan and later won a Filmfare award for the same has now become of the most successful actress of Bollywood. Yes, we are talking about the gorgeous and talented Anushka Sharma. She is one of those Bollywood actresses who just not proved her acting skills but also established herself as a successful entrepreneur also. Her work is not just limited to making money but she is also working as an activist for animals.  On her 30th birthday, we listed 5 reasons why Anushka Sharma is a brand in herself.

The actress is known for her versatility and acting skills. In ten years of her Bollywood career, Anushka played various unforgettable roles. Starting from Band Baja Baarat‘s Shruti the wedding planner,  bold and brazen Farah Ali from Dil Dhadakne Do, her never-seen-before avatar of Meera form NH10, wrestler Aarfa from Sultan, fearless reporter Jaggu from PK, independent and a bestie Alizeh from Ae Dil Hai Mushkil, a Beautiful ghost from Phillauri to her latest experimental role of  Pari  are some of her best roles which  proved her acting skills. From her acting graph to her film choices the actress established herself as one of those rare actresses who dare to experiment with her roles. She tries to do every kind of roles form be it is a role in typical big-budget films to small films.

Anushka was just 25 years old when she produced her first feature film NH10under her production house Clean Slate Films. In a male-dominated industry Bollywood where female producers are rare to find, the actress-producer stands tall as an independent producer of unconventional films like NH10, Phillauri and Pari. 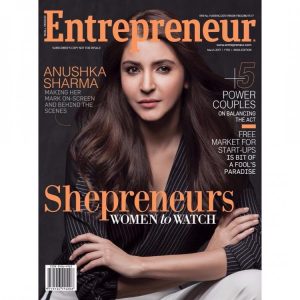 PETA’s Person of the Year, Anushka Sharma also uses her star power to speak up on causes such as animal welfare and bring attention to homeless animals. She also launched a campaign called PAWsitive to raise awareness of the suffering fireworks cause to animals and taking to Twitter to demand a ban on cruel carriage rides in Mumbai – where often-lame horses are forced to haul passengers in all weather extremes without adequate rest, food, or water. She also took an initiative to adopt stray dogs and also promote the same.

The multi-hyphenate has also entered the fashion business world by launching her own clothing line NUSH.

Apart from various film awards, the actress has also made it to the Forbes 30 Under 30 Asia list for 2018. She also received Dadasaheb Phalke Excellence Award for 2018 for her efforts in backing clutter-breaking content which has become genre-defining success stories.

We wish the happiest birthday to Anushka Sharma!