CELEBRITY OF THE MONTH: HERE ARE 5 REASONS WHY VARUN DHAWAN IS BOLLYWOOD’S NEXT BIG THING

By Khushboo Yadav On Apr 16, 2018
CELEBRITY OF THE MONTH: HERE ARE 5 REASONS WHY VARUN DHAWAN IS BOLLYWOOD'S NEXT BIG THING
4,981
Share

After assisting Karan Johar on Shah Rukh Khan and Kajol starrer My Name is Khan, Varun Dhawan made his Bollywood debut in 2012 with  Student Of The Year alongside Alia Bhatt and Sidharth Malhotra. In the last six years, Varun has acted in total ten films without any flop film in his career. To earn a superstar tag in Bollywood is not an easy task at all. But after observing his six years filmography we can say that Varun Dhawan is the next superstar of our generation. He is the perfect amalgamation of five biggest superstars of Bollywood and we can prove it through this article.

Here are 5 Dhawan’s qualities/talents which make him a next big thing of Bollywood.

In his six years of Bollywood career, Varun Dhawan delivered 10 films and with zero flops. He has four films in 100 Crore Club which is most by any new actor. By giving back to back 8 hits in a row after his debut film, Varun is actually on the path of breaking the hits record of superstars like Rajesh Khanna and Salman Khan. Rajesh Khanna made a record of delivering 15 consecutive successful films and Salman Khan also delivered 10 consecutive box-office success films. 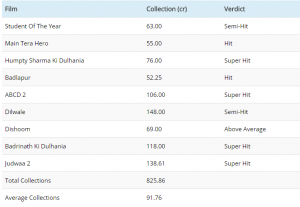 Varun’s impeccable comic timing reminded people of Govinda, whose talent was quite unusual, his expressions, dialogue delivery made him one of the superstars of his time. Following the footsteps of Govinda in comedy, Varun also made his special place in Industry.  From Dhawan’s latest release October to films like  Main Tera Hero and Dishoom Varun proved that he can pull off comedy very well.

As he once said in an interview, Stardom is a person’s ability to connect with his fan. An actor cannot become a star, it is the people who make him a star. These lines perfectly fit in his situation as not just his Box Office presence, but his popularity and acceptance among the audience is also something that helps him to be a star. His film choices and ability to connect with people which helped him to build a massive fan following and his stardom.  Apart from his films, he also speaks up on issues and interacts with his industry colleagues on social media. He is active on Instagram and Twitter and updates his fans with his work be it films, events or even gym sessions. This helps him to connect with more and more people and build up a huge fan club.

Aamir Khan, one of the superstars is very choosy when it comes to types of films. Our next superstar Varun also tries to follow Aamir on his filmy journey as he is been try to doing films of different genres. In Bollywood where actors are typecasted on the basis of their previous roles and film success, Varun tries to do different films and try hard to impress the larger audience with his film choices. As his film choices are not only limited to typical commercial masala films. But he tries to be versatile, as he chosen a dark film like Badlapur and other films like Shoojit Sircar’s October and his another upcoming glamourless film Sui Dhaaga. Such film choices proved that he can do anything when it comes to acting.

Fitness, Good looks and dance are an important part of this show business. Due to his hard work, Varun had it all. His washboard abs, drool-worthy physique, charming looks and dancing skills make him a complete package to be a superstar. The young hunk is very happy to flaunt his 8-pack abs be it his films or magazines covers, he is not shy to show it off. Talking about his dancing skills, When Varun Dhawan grooves in his films he gets everybody dancing to his tunes. He already has a dance film,  ABCD and also signed another big dance film helmed by choreographer-turned-director Remo D’Souza.

Do you agree that Varun Dhawan is the nest superstar of Bollywood? Share your views in the comment section below.

COUPLE GOALS: ISHQBAAZ ACTOR NAKUL MEHTA  IS MORE ROMANTIC IN REAL LIFE THAN HIS REEL LIFE, HERE’S IS THE PROOF

CELEBS SOCIAL MEDIA DIARIES: HERE ARE ALL BOLLYWOOD HIGHLIGHTS FOR THIS WEEK