Two weeks ago, we had no idea about the abusive ways of Harvey Weinstein. Till then, he was a legendary producer who gave many work when they needed it the most. When The New York Times published its horrifying investigation of Harvey Weinstein and the multitude sexual harassment allegations that had been made against him, a lot of people in the industry were flabbergasted, and others got the courage to come forward with their experiences.

Harvey spent thirty years of his life sexually assaulting, molesting and raping women in the name of power and money. Misleading the actresses to believe they were called for a meeting he would welcome them wrapped in a bathrobe and sometimes naked, and ask for sexual favours. It’s a shame that it took all these years for that sadist to get his due. But, it’s better late than never!

We share the experiences of some of these women here in hopes to start a discussion about sexual harassment and how it is important to come forward when something like this happens because waiting on it can result in the same thing happening to others. Nevertheless, we applaud the spirit and grit of these women who had the courage to speak up.

The American actress shared her experience with the world on her Instagram feed. She met Harvey at a party and the very next day she was asked to meet him for a ‘general meeting’ in his hotel room.

The French actress told The Guardian that Weinstein tried to sexually assault her and how they were merely chatting, sitting on the sofa when he jumped on her and tried to kiss her. 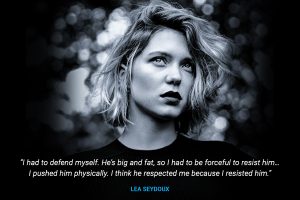 The model/actress was asked to beware of her sexuality

When Graham spoke about her experience she told Variety about how Weinstein told her about the agreement he had his with wife, where he could sleep with whoever he wished to when he was out of town. She walked out of the meeting feeling petrified because even if he didn’t directly ask for it, he was hinting towards the same. Graham added that she declined a subsequent meeting with Weinstein at the hotel because she did not want to be alone with him. 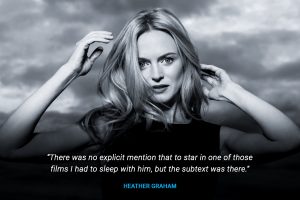 Angelina opened up about her experience and she’d resolved to never work with him ever again. 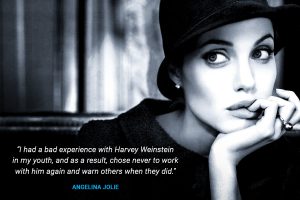 Gwyneth was 22 when she had her first encounter with this beast. When she told her then-boyfriend Brad Pitt about the same, Weinstein called her and “screamed at her for a long time”, berating her for disclosing what had happened in the hotel room. It was then she was cast for Weinstein-produced film Emma and of which she was afraid she’d be fired from after this incident. 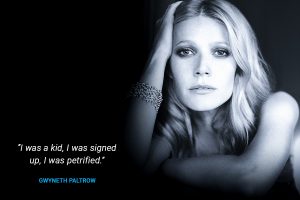 In 2011, as Jessica recollects, she was summoned to Harvey’s room and was promised a role if she gave him a naked massage. having refused to do the same Weinstein lashed out and told her that she needed to lose weight “to compete with Mila Kunis” before promising her a meeting with one of his female executives. 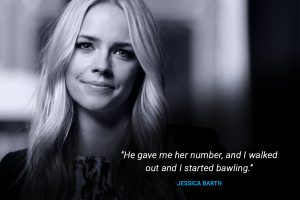 On speaking to Ronan Farrow for The New Yorker, Argento recollected how she arrived at a venue in french Rivera assuming it was a party and later on found out it was merely him, who was present there. Argento said that Weinstein changed into a bathrobe, and forcibly performed oral sex on her as she repeatedly told him to stop. 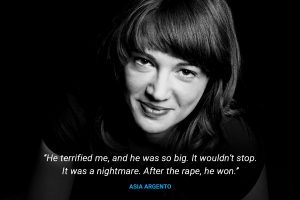 In a series of tweets, Rose McGowan accused Harvey of having Raped her.

1) @jeffbezos I told the head of your studio that HW raped me. Over & over I said it. He said it hadn’t been proven. I said I was the proof.

2) @jeffbezos I had already sold a script I wrote to your studio, it was in development. When I heard a Weinstein bailout was in the works

3) @Jeffbezos I forcefully begged studio head to do the right thing. I was ignored. Deal was done. Amazon won a dirty Oscar.

4) @jeffbezos I called my attorney & said I want to get my script back, but before I could, #2 @amazonstudios called to say my show was dead

4) @jeffbezos I am calling on you to stop funding rapists, alleged pedos and sexual harassers. I love @amazon but there is rot in Hollywood

5) @jeffbezos Be the change you want to see in the world. Stand with truth. #ROSEARMY #Amazon

While shooting for a film in 1977, Kiss The Girls, Ashley was asked to come to Harvey’s room. On recalling the incident Judd told New York Times about her experience, “How do I get out of the room as fast as possible without alienating Harvey Weinstein? Feeling “panicky, trapped”, In order to get herself out of that situation Judd had to joke about how she had to win an Oscar in order to let that man touch him. 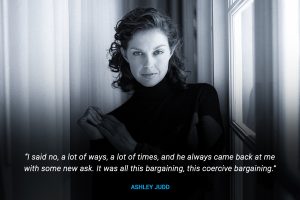 There are a number of other women who haven’t been included here, but have suffered at the hand of Harvey Weinstein. These incidents only prove how prevalent sexual harassment and assault is and why we need to talk more openly about it. Had these women come out in the open when the specific incidents took place, a number of other women could’ve been saved. But it is better late than never and we hope Weinstein gets what he deserves.