Daisy Shah tops the Score Trends India as the most popular actress in Newsprint surpasses Jacqueline !

Daisy Shah has shocked all by hitting the bull’s-eye, this Race 3 actress has topped the ScoreTrends India chart by becoming India’s most popular actress to be mentioned and published in Newsprint.

Daisy’s popularity  post Race 3 has amplified especially with the most talked about dialogue of the film  ” My business is my business”  which got popular then any Salman Khan’s dialogues in the film .

Daisy tops the Score Trends Newsprint chart, a US based company which collects data with 71 points while Jacqueline is on the second position with 57 points followed by Anushka Sharma, Kareena Kapoor Khan & Neha Dhupia on third fourth and fifth rank. 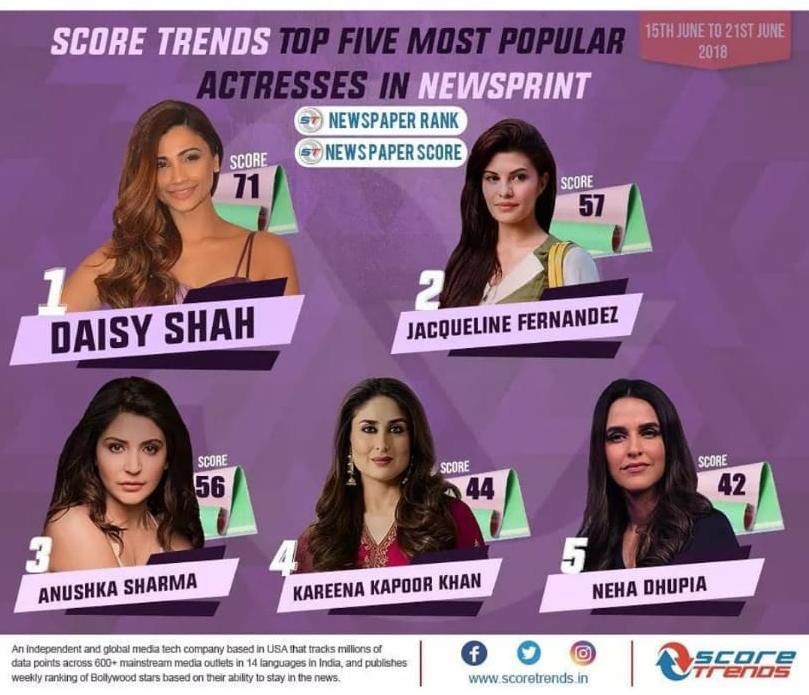 “Daisy’s report card shows her rise on media mentions in Newspapers across the country . Even her social handles have showed a drastic growth”  Ashwini Kaul co founder of US based tech Score Trends India.

The statistics for these rankings are supplied by Score Trends, a US-based media-tech startup. “We collect data from over 600 news sources across 14 languages in India to analyse the media. This is done from Thursday to Thursday,” concludes Ashwani Kaul, co-founder of Score Trends.

HISTORY TV18 to unravel ‘The Secret Life of Marilyn Monroe’