Bollywood sisters are big sister goals for the world. From hitting the gym together to shopping together to partying together to supporting each other, these sisters show how to be a great duo. B-Town has many sister duos that are loved and talked about and most importantly, the duo sisters are successful on their own. While some happen to be a success in Bollywood, others happen to be doing a great job in different fields, say Deepika Padukone is a superstar whereas her sister Anisha Padukone is among the top 10 golf players. Here are 8 Sisters of B-Town:

The Kapoor sisters are the gossip mongers of B-Town. They are known for being fitness freak and their fashion outings are always on point and not to forget the parties they throw and little munchkin Taimur they own.

Deepika Padukone is one of the most refined actress Bollywood has as of now and her sister is not less. Anisha Padukone is Indian Professional Golfer!

The daughter’s of Sridevi are frequently spotted by paparazzi and always have their fashion game on point. Sridevi’s elder daughter Jhanvi is soon going to make her Bollywood debut with Ishaan Khattar in Dhadhak.

Anil Kapoor has a duo of talented daughters. Sonam Kapoor, on one hand, is the fashionista of B-Town, but all her fashion comes from her fashion stylist sister Rhea Kapoor. Both the Kapoor sisters have recently launched their clothing brand Rheson. Not only this, Rhea Kapoor made her Bollywood debut with Wake up Sid and has produced Sonam Kapoor starrer Aisha and Khoobsurat. Now, Rhea Kapoor is producing Sonam Kapoor’s next Veere Di Wedding.

Kamal Hassan’s daughters are a packet of talent. Shruti Hassan who is known for her acting and singing skills has many awards in her bag. Whereas, Akshara Hassan has made her debut in Bollywood with Shamitabh where she worked with living legend Amitabh Bachchan. She is currently busy with her Tamil movies. 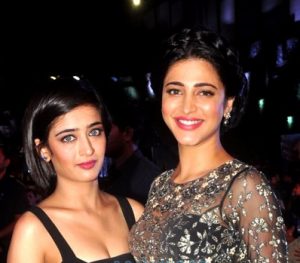 Malaika is one of the hottest mommy of B-Town and apart from this, she is favorite for paparazzi as media is always busy capturing her gym looks and airport outfits. Her sister, Amrita Arora recently had her birthday and her birthday party was the talk-of-the-town.

Both the Shetty sisters are brilliant dancers. Shilpa is known for her dance moves and yoga sessions and Sunday bing. Apart from this, she has recently launched her second book and is currently hosting a TV show. Shamita Shetty is a renowned designer and has recently worked in a web series named Yo Ke Hua Bro.

Kriti Sanon is a star in making, so is her sister. Her younger sister Nupur Sanon is an internet sensation since she did cover version for songs like Teri Gaaliyan and Bekarar Kar Ke. This budding star has a keen interest in B-Town and is interested in making her future in Bollywood.

B-Town is ruled by these talented sisters.

FROM VIRAT-ANUSHKA TO RANVEER-DEEPIKA, THE MADLY IN LOVE PICTURES OF B-TOWN COUPLES

Its Reasons And Seasons For Actress Jyoti Saxena; The Actress Celebrates The Republic…

SHWETA TIWARI LANDS IN CONTROVERSY WITH HER STATEMENT THAT…

Jethalal’s Superstition Lands Him In A Tough Spot With…

Its Reasons And Seasons For Actress Jyoti Saxena; The…