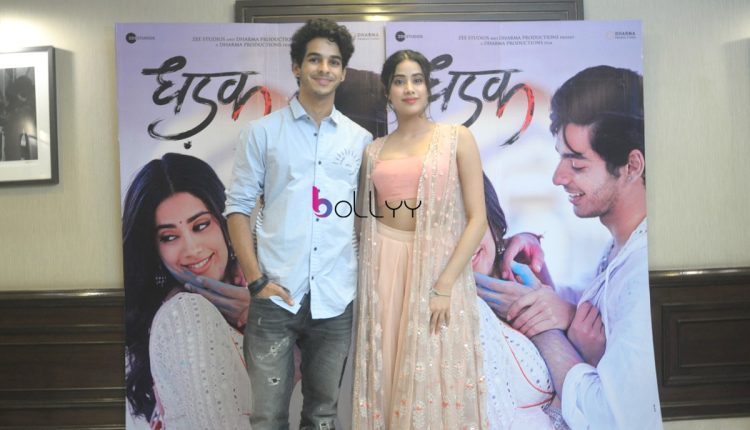 The beautiful cast of Dhadak, talented Ishaan Khatter and Janhvi Kapoor were in Delhi for the promotions of their upcoming romantic drama flick. A perfect chemistry of Ishaan and Janhvi which is going hyped these days, reached to PVR Plaza at Connaught Place today for media interactions and promotion of their upcoming film which is hitting the Big Screen on 20 July.

Directed by talented Shashank Khaitan. The film trailer already got a massive response and both stars are getting a huge amount of appreciations. Being in limelight with media in Delhi , Janhvi said, ” I’m very excited about the movie but quite nervous too. I hope audience will love our work as we both worked with full dedication. We have come with a unique story.” Whereas, talking about the film Ishaan stated, “I’m also very excited for this movie and I would like to thank Dharma Productions for giving us opportunity and we are really greatful for them.”

Dhadak is debut film for beautiful Janhvi Kapoor. She said, “I really had a great experience I had never before. I have learned a lot of things I went to Rajasthan and observe carefully about their nature, way of talking and everything. Working with Ishaan was really fun.” This movie is a remake of blockbuster Marathi film Sairat. Therefore, for the same Ishaan stated, “this film has really a unique plot and theme and basically we are touching a sensible social issue thorough this film. I hope this film will touch viewers’ heart”.

Produced by Dharma Productions and Zee Studios and this film stars Janhvi Kapoor and Ishaan Khatter and Ashutosh Rana in lead roles. It is scheduled to be released on 20 July 2018. The story is a take on caste differences prevalent in Indian society. It is an official remake of the critically acclaimed Marathi film Sairat.