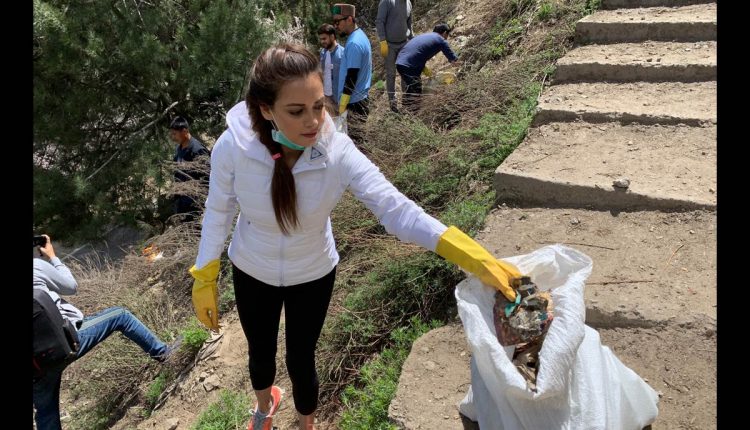 Dia Mirza Does Her Bit To Rid Himachal Of Plastic

Dia Mirza who is as passionate about acting as she is about the environment decided to focus on both as she shot for her upcoming series Kaafir in Himachal Pradesh.

Dia Says, “I have been following the incredible work Pradeep Sangwan Of Healing Himalayas and his team of volunteers have been doing over the last three years. Their work is truly inspiring. When I got to Himachal to shoot for Kaafir I reached out to Pradeep and told him I would like to join him and highlight the work he is doing.”

On one of the Sundays when she was not shooting Dia decided to join hands with a local NGO Healing Himalayas and its young army of child volunteers to clean the hillsides around her location of plastic.

Our #SundayMotivation came from @healinghimalayas! We trekked through the hills and picked up 120 gurney bags of plastic. There is more. And we will not stop till we’ve made all accountable for plastic waste. #BeatPlasticPollution @unenvironment @earthlingfirst

Dia add, “So the first and only Sunday I had off from shoot was dedicated to cleaning up the mountain that I would travel by everyday to work… We were joined by 50 local school children, 40 volunteers. It was the best Sunday! “

Early morning Dia joined the children with gunny bags that was full of plastic waste by the end of the evening.

All we can say is this is one committed environmentalist.

We Are Coming With Comic Version Of Othello- Producer Vikas Vashistha

We Wanted Manju To Appear Like A Woman Who Is Strong, Independent And Single-Handedly Takes Care Of Her Children – Says Tabu On Her Character In De De Pyaar De

Pavail Gulati: Thappad Is Not An Answer To Kabir Singh