Do you know : Before ‘Sanju’ Ranbir Kapoor has acted alongside Sanjay Dutt in 2010

Read on to know the complete deatails!

The nation is eagerly waiting for the release of the most awaited movie of the year Sanju. Ranbir Kapoor is playing the central character of the movie and will portray various stages of Sanjay Dutt’s life in the movie. The actor has already amazed everyone with his transformation of look for the movie and now when it is just less than 10 days for the movie to hit the theatres, people cannot hold their excitement level.

Now recent buzz suggests that, Sanjay Dutt might be in for a special appearance in the film and will be seen shaking a leg with Ranbir Kapoor in the movie. However, there is no official confirmation yet. 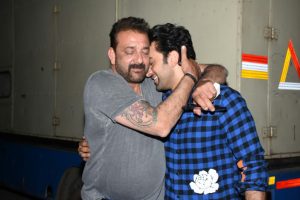 But not many know that Sanjay and Ranbir once shared screen space together eight years back. In 2010, when Ranbir was just 3-year-old in the film industry, he acted alongside Sanjay Dutt.

It was a 2 minute and 47 seconds long advertisement for a beverage brand which featured Jacqueline Fernandez and Vindu Dara Sing, along with Ranbir Kapoor and Sanjay Dutt.

Watch the video below

Ranbir Kapoor and Sanjay Dutt will be also seen in Karan Malhotra’s next Shamshera.

Do you know : Alia Bhatt once performed on Dola Re Dola for Ranbir Kapoor