EVER WONDERED IF TRUE LOVE EXISTS? SELENA GOMEZ’S BEST FRIEND HAS PROVED IT DOES

We’ve heard and read the idiom “taking a bullet for someone” several times in our lives but have rarely ever experienced it. Now, we’ve come across one such gesture that literally stands true to it.

If you’ve been reading the news lately, you know that Selena Gomez went under the radar for the past two months and everyone was speculating that it was because of a Lupus flare-up. While that was true, what no one knew was that Selena was actually recovering from a surgery, a kidney transplant to be accurate. This came to light when the actress shared a photo of her ordeal on Instagram a few days ago. What really caught our attention was the other person lying on the hospital bed besides Selena. It was Francia Raisa.

Raisa donated her kidney to her ailing friend and this gesture did not just rekindle our faith in friendship but also selfless love. IT EXISTS.

It’s imperative for us to realise that this story has two heroes. Francia had the option of leading a normal life or choosing one with complications. She chose the latter because it meant saving her best friend. To be able to realise that someone else’s problem is bigger than yours is not something every human being is capable of.

As TMZ further reports, the transplant operation and recovery were actually more difficult for Francia. The operation was months ago, and they were told that it wasn’t until recently that Francia was only able to do less strenuous forms of physical activity such as yoga. Her diet is restricted and needs monitoring. 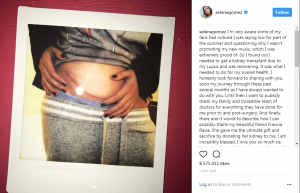 Last year while Selena was on her Revival Tour, she collapsed on stage and it wasn’t until months later that she made a comeback with an Instagram post. While we all knew something was seriously wrong it was only a few days ago that we realised how difficult that phase must’ve been for the pop star. We couldn’t be more thankful that both Selena and Francia are recovering well and hope they just keep getting better with every passing second.

LEONARDO DICAPRIO AND TONY GARRN GETTING BACK TOGETHER?

RANBIR KAPOOR, VIRAT KOHLI TO FACE OFF IN A CHARITY FOOTBALL MATCH