Charismatic, dynamic lead actress-writer-co-producer Avani Modi was the star-attraction of all eyes at the formal trailer release event of her sensational movie ‘Modi Ji Ki Beti . Where she plays the tantalizing title-role. The hilarious film which throws up a comedy of errors caused in the course of mistaken-identity kidnapping, ‘dumb militants-terrorists’ and dhamaal-masti will be releasing on October 14, 2022. The trailer of ‘Modi Ji Ki Beti’ was released on Monday with much fanfare at PVR Icon Theatre in Mumbai. During the launch of the trailer not only the star cast of the film was present but many other celebs also graced the occasion. Apart from the trailer, a few songs from the film were also shown to the media during the launch event. The political special guests-dignitaries who were being expected, were unable to attend the trailer release event as apparently “they were “travelling and pre-occupied” as informed by one of the main hosts. 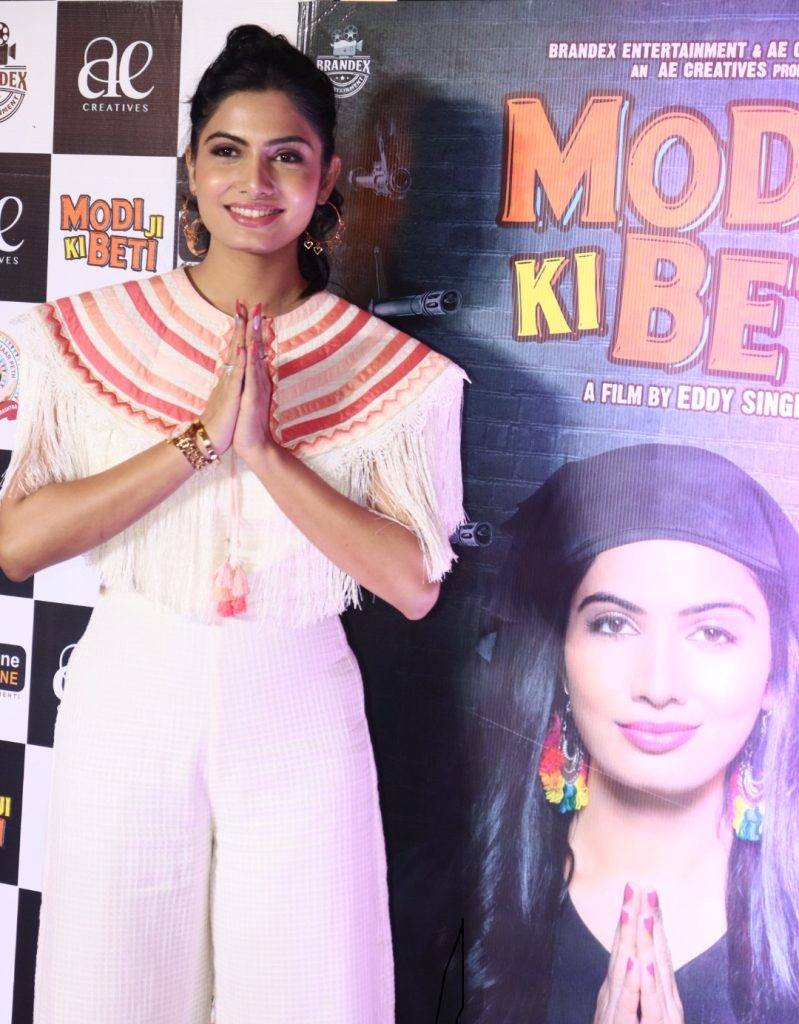 Versatile vivacious Avani Modi has previously worked in the Hindi movie ‘Calendar Girls’ directed by Madhur Bhandarkar and also in Tamil and Gujarati language films. This time Avani has received a lot of appreciation for her latest unconventional yet vibrant role after viewers have watched the trending-trailer. In ‘Modi Ji Ki Beti’ Avani is in the de-glam lead role along with Pitobash and Vikram. Enthuses Avani” The media is the one who made me ‘Modi Ji Ki Beti’ I want to sincerely thank them. Modi Ji Ki Beti is very special to me. You’ll enjoy the surprise-jolts-twists film and it also delivers a great message. Although the movie-title has that suggestive stance, our has no direct connection with politics.“ 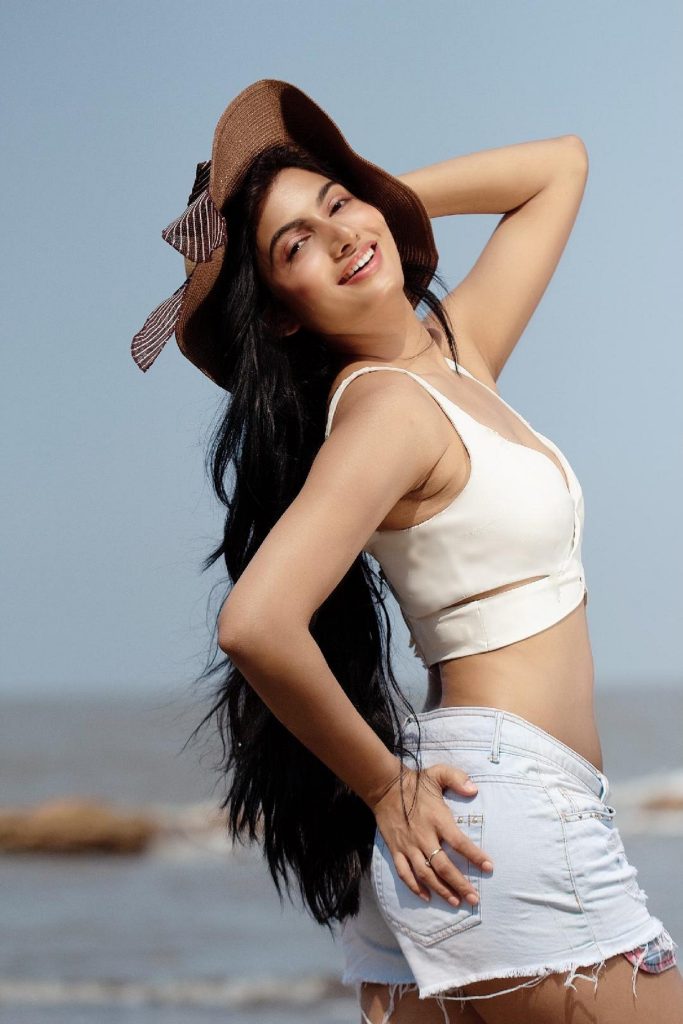 Competent director Eddy Singh, has also directed over 200 ad-films in the past and makes his directorial debut with “Modi Ji Ki Beti” as his first feature film. He said “ Modi Ji Beti is a total fun film and a joy roller-coaster ride and we are trying to give good entertaining films. After the recent deptressing covid-pandemic, we now need something refreshingly funny and original to release our stress.. By the way our movie was seen, appreciated and certified by the Censor Board Examining Committee in Mumbai and that have granted us a “U” certificate [unrestricted viewing] .“ informs Eddy Singh

Is there any emotional bonding between the screen-characters of Avani Modi and an enemy-territory Army Officer played by tall handsome actor-model Tarun Khanna ? While Avani insists there is hardly any scope for on-screen-romance, Tarun smiles and says that the audiences can look forward to some unexpected kahaani-mein-twists situations. “ Speaking about his Pakistani fauji character, Tarun discloses that , “ I play this pivotal patriotic character of a highly decorated Pakistani senior military officer Major Omar Siddiqui who refuses to get brainwashed by blind fanatic ideology of some of his countrymen. Also on a mission to track a missing [kidnapped ] Indian girl he tries his best to clear the tarnished image of his own country,” reveals debonair actor-model Tarun who seems to have set an incredible national record of having played Lord Shiva-Mahadev in ‘nine’ different mytho-TVshows and will soon be seen in an OTT mega-web series show

When quizzed on whether she would want to enter real-life politics in future, the articulate orator Avani Modi responds. “ Curently I feel I am too small to comment on this, But my parents have always taught me that when you are successful and achieve stardom, it’s time to pay-back to the society and you country by way of contributing to social welfare . Politics is definitely a mega-platform to bring about positive change. There is this galat faimi of a taboo-tag on political careers for women. Today our nation has a highly competent and respected Lady President. Instead of only criticizing the Government, each Citizen should endeavour ‘dil-sey’ to help in social welfare,” asserts adventurous Avani who is all set to play Garba-Dandiya-Raas during the Navaratri festivities, commencing next Monday [Sept 26th] along with her ardent fans. 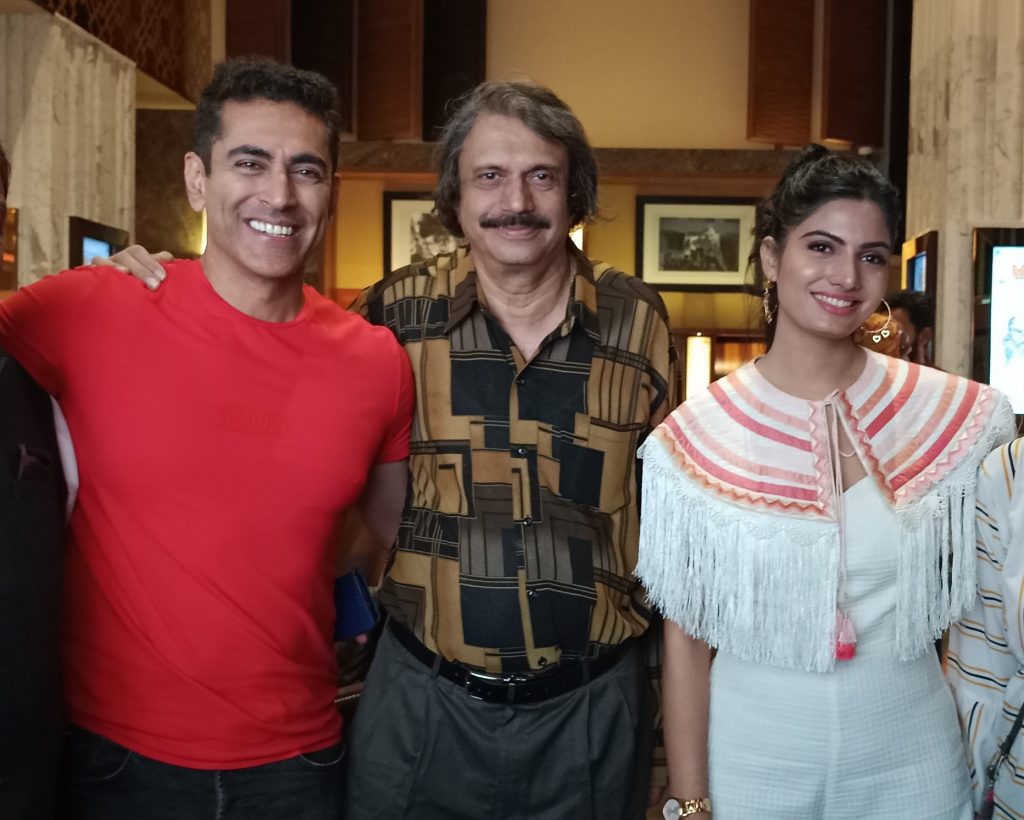 The movie ‘Modi Ji Ki Beti’ is produced by AE Creatives and presented by Brandex Entertainment the film is being marketed by Brandex India, with Avani Modi, Eddy Singh, and Arpit Garg.