FIRANGI MOVIE REVIEW : KAPIL’S SECOND FILM IS WORTH NOT A WATCH! 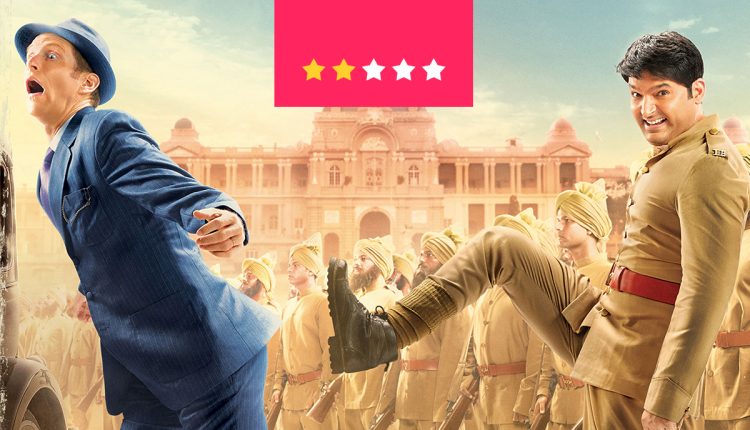 One of the most entertaining comedian of our nation, Kapil Sharma is back with his second film, Firangi. Kapil who rose to fame with his comedy show on television tried his hands on the big screen as well with his debut movie ‘kis kis ko pyar karoon‘ and the movie went fairly good for a debutante but with his second , will he again hit the ball out of the park? Read the full review to make your mind before going for this one :

STORY: Set in 1921 pre-independent India, this limited budget period film is a languid love story served with a pinch of patriotism. Firangi is the love story of Mangatram (Kapil), an innocent man who takes up a job, earns money, commits a few mistakes and tries to rectify them. But he goofs up in the effort and then puts his life at risk to undo those bloopers. All these for the sake of marrying the woman of his choice, Sargi (Ishita). The story revolves around Mangat and his mistakes when he unintentionally and unwanted-ly put the village land on risk as the king and the foreigner serviceman wants to take up the land for setting up their alcohol factory.

Performance: Kapil act innocent and robotically romance a much younger looking Ishita Dutta , who channels her inner Amrita Rao for almost three hours is hard to sit through and you will again and again keep saying to yourself that Kapil should really stick to comedy. Kapil yet again delivers his comic parts nicely but when it comes to romancing Ishita seems very forced and it totally ruins part of a good cinema. On the other hand, Ishita tries really hard to deliver a power-packed performance but she has very less screen-time as it’s a concern in almost every Bollywood flick but she still manages to hold your eyes on screen with her natural screen presence. Even the greatest of actors like Aanjjan Srivastava has very less to deliver in this one and couldn’t hold you to your seats till the very last.

Story and Direction: Written and directed by Rajiv Dhingra has delivered a story which may not sound wonderful, but it had the potential of a sweet, fun-filled and warm film. However, the boring narrative, an incoherent screenplay and mismatch between milieu and discourse in certain scenes of the film make it an extremely mind-numbing affair and at times you would be wondering where the film is heading to, why is this character in this film? what is he doing? Why this scene was left un-finished in between and what not? There was many loop holes but it was expected from a newcomer in the industry but at this level, you need to rectify them all in your initial days.

Music: The songs and the soundtrack was also not able to hold this one as it’s such a lengthy movie that you will try to avoid even the good songs which appeared in the movie. Oye firangi is a quirky number whereas Sajna Sohne Jiya and Sahiba Russ giyiya are romantic numbers portrayed by Kapil and Ishita.

To Conclude, Firangi is a comedy that falls absolutely flat. With boring plot & unconvincing fictional pairing, it ends up appealing to absolutely no one. Full marks to Kapil and Rajiev for trying something out of their comfort level but the audience won’t enjoy doing them that and the worst part of this movie is it’s length which is 160 minutes odd and trust me, you will not regret missing this one. For me, it’s a 2/5.