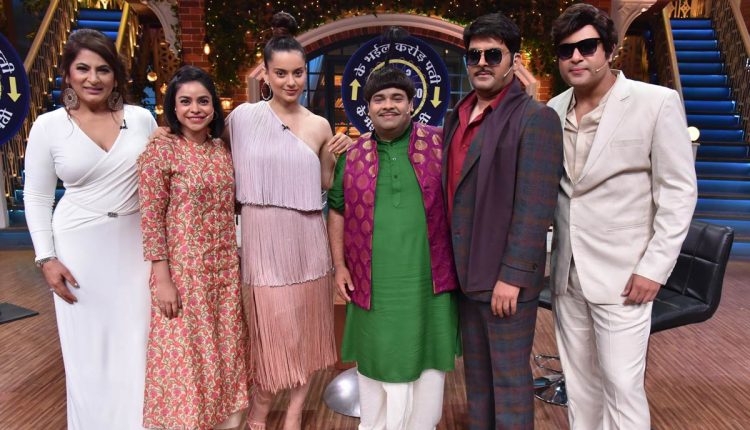 Food Is The Answer For Kangana Ranaut! Revealed On The Kapil Sharma Show

Actress Kanagana Ranaut, Queen of Bollywood will soon be seen in the upcoming episode of Sony Entertainment Televiosion’s The Kapil Sharma Show to promote her movie ‘Judgemental Hai kya’. During her presence in the show, the actress will be seen revealing some interesting facts about her personal and professional life. She will also be seen prasing various other co-actors like Akshay Kumar for his fitness routine, Kareena Kapoor for her work balance skills, and Shahrukh Khan for his finance skills. Kangana who has been a hero in her own movies like, Fashion, Queen, Manikarnika will be seen sharing details on how she’s looking forward to work with respected actors like Vicky Kaushal, Ranveer Singh and the beloved host, Kapil Sharma.

In a conversation with Kapil where he tried to enquire about Kangana’s hobbies and her favorite pastime during her shoot breaks, Kangana shares her fondness for cooking. Elaborating further she mentioned, “I enjoy cooking parathas and pakodas. And, if I am not cooking, I love eating drinking chai and eating pakodas.” Further enquiring about Kangana’s singing skills Kapil mentioned that he has heard that Kangana is a very good bathroom singer. Correcting the fact Kangana mentioned, “I am not a bathroom singer but actually a very good singer.” Adding further, Kapil asked Kangana to sing a song for his fans and entire the entire audience. On kapil’s demand Kangana sang a Lata Mangeshkar’s song ‘Tera Mera Pyaar Amar’ and took the show’s energy on another level.

Further in the show Kangana will also be seen reliving her ‘Queen’ days and shaking a leg on her popular song ‘London Thumkada’ with Kapil and one of her fans.

For an entertaining weekend tune in to watch The Kapil Sharma Show every Saturday and Sunday, 9.30 pm on Sony Entertainment Television!