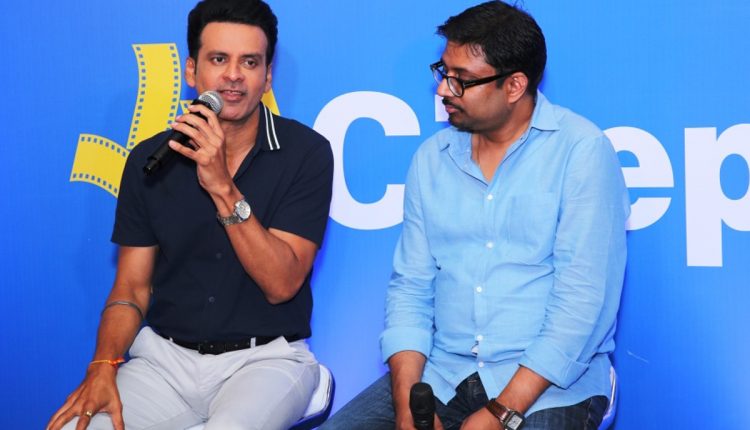 The visit was aimed to promote the upcoming thriller “Gali Guleiyan” which is going to release on 14th October 2018 across India. Filmmaker Dipesh Jain is making his directorial feature debut with psychological thriller Gali Guleiyan, with some of the biggest names in Indian independent cinema Neeraj Kabi, Manoj Bajpayee, Ranvir Shorey, Shahana Goswami, Ashwath Bhatt, Arbaaz Khan and Om Singh.

Movie assimilations in the cinemas have become an imperative aspect to make multiplexes more engaging and interactive, where enthusiastic movie lovers gets the opportunity to experience the real ambience of the film beyond the silver screen and red carpets.

The magnificent Janak Cinema multiplex in Janakpuri has total 4 Screens with 740 seating capacity. The theatre offers an exceptional 3D experience with Real D 3D technology in 2 screens and 100 percent digital projection in all its screens. The flagship F&B offering from Cinépolis – Coffee Tree offers delectable gourmet food that endeavors to provide enhanced cine experience for Delhiites like never before.

Speaking on the occasion, Mr. Devang Sampat, Director – Strategic Initiatives, Cinépolis India said, “We are honored to have the iconic presence of an International filmmaker, Mr. Dipesh Jain who is making his debut along with the legend Mr. Manoj Bajpayee and joining us for the meet & greet session at one of our most iconic properties in the heart of New Delhi. We at Cinépolis, choose the best possible way to captivate our patrons through various engaging initiatives. We are confident that Gali Guleiyan will be one of the top grossers this year. We are positive that with such events, we will be able to engage with more & more patrons and provide a more evolved entertainment experience.”

Cinépolis currently has a total screen-count of 350 screens and has 59 cinemas across India.  The company has created a strong footprint across 57 Indian cities having a strong presence in major metros: Delhi, Mumbai, Kolkata, and Bengaluru.

Bollywood filmmakers give a thumbs up to ‘Laila Majnu’

With Immunity Being The Need Of The Hour, Mira Kapoor & Sanjeev Kapoor Urge You…

Remembering Dr Bhabendranath Saikia With “Twilight At The Port”

Fighting Fit Even After Forty Years