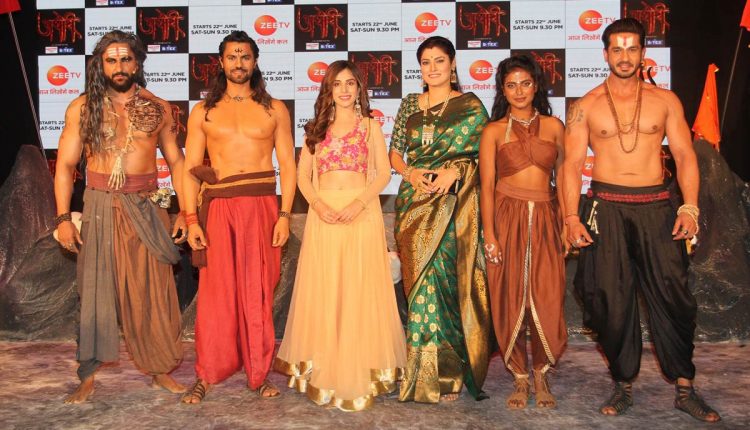 Gaurav Chopraa Back With Aghori, A Dark Love Story Set Against An Intriguing Canvas On Zee Tv

The mere mention of Aghoris triggers an image of fear, intrigue and mystique in our minds, simply because precious little is known about this reclusive cult of sadhus … One’s instant visualization of an Aghori is that of an ash-smeared man with intense eyes, sporting dreadlocks and reciting verses of Shiva and spirituality. But do you know that a man who looks no different than you or me, has a day job and seems well-adjusted socially, could also be a worshipper of Aghora? What if a girl happens to fall in love with a seemingly ordinary man, only to discover later that he is actually an Aghori? What if he has consciously held back his true identity to serve a hidden agenda that he plans to fulfill through her? A story of love, mysticism and deceit, Zee TV’s next impactful weekend fiction offering, ‘Aghori’ will shatter all the stereotypes surrounding love and present a never-seen-before love story set against the fascinating backdrop of the Aghori world. Produced by Essel Vision Productions Ltd., Aghori will premiere on 22nd June 2019 and air every Saturday and Sunday at 9.30 pm on Zee TV.

Aparna Bhosle, Business Head, Zee TV said, “Our next content offering is a weekend primetime fiction drama where we present audiences with a love story told against a truly unique, compelling canvas – a world that most people know only vaguely of  but have a lot of curiosity to find out more about as they have grown up hearing all kinds of colorful folklore about – the Aghoris. It is the very first time on Indian television that a show is exploring this space. Neither is it an attempt to spread awareness about Aghori practices nor do we make claims of documenting their reality. The show takes cognizance of the fact that Aghoris could exist amongst us without our knowledge and takes off from there to narrate a fictionalized account of a seemingly ordinary man who is actually an Aghori on a mission. It follows him as he crosses paths with a woman who falls in love with him, unaware of his Aghori practice and a war between their heads and hearts that ensues as they set off on a journey of love, deceit, hidden agendas and a thirst for immortality. After our announcement of an exciting season of Dance India Dance: Battle of the Champions, we plan to further strengthen our weekend primetime line-up with this exciting fiction property.”

Shariq Patel, CEO, Essel Vision Productions Ltd said, “Breaking the clutter of love stories on Indian television, the romance of Aghori navigates its way through a very intriguing,fictionalized world of the Aghoris. Our story follows Advik,  a strong-headed, well-trained student of Rudranath, an Aghori in search of immortality. On a mission to fulfil thecommand of his guru, Advik must get Kamakshi, a young woman born under a rare planetary alignment, to readily sacrifice her own life. The story turns dramatically interesting as this determined young Aghori has to weigh his duties to his guru against his own growing love for Kamakshi `- a woman who loves him, innocently unaware of his agenda. We have a stellar cast on board and hope to engage our audiences with this captivating concept .”

Gaurav Chopraa who plays Advik said, “‘Aghori’ is a fascinating story set against the backdrop of the Aghori world. The canvas against which the love story plays out is unique and never-seen-before. With such an impressive narrative and a meaty role to sink my teeth into, I couldn’t refuse a powerful character like Advik. As an actor, I always prefer experimenting and playing different roles. Moreover, I have never done something like this in the past. I hope the audience enjoys and appreciates Advik.”

Debutante Simaran Kaur said, “I am excited to make my debut with such an exciting show on a leading channel like Zee TV.The concept of the show is unheard of, hasn’t been explored on Indian television and the intrigue surrounding Aghoris are the factors that drew me towards it. Kamakshi, as a character, is a strong and level-headed person who falls in love and gets married to someone who she isn’t aware is an Aghori. Little does she know that her life is about to take an unusual turn. I hope that the viewers connect with my character and enjoy the show.”

Parag Tyagi seen as Aghori Rudranath said, “I have a long-standing association with Zee TV and I thoroughly enjoyed working in the hugely successfulsupernatural thriller ‘Brahmarakshas’. The storyline of ‘Aghori’ is very unique and will present a fascinating love story set against the backdrop of the Aghori world. My character of Rudranath is a megalomaniac and wants to attain immortality and can go to any extent to achieve the same. I am happy and excited about this new venture.”Aghori also features a powerful cast including Preeti Puri, Poulomi Das, Zafar Rajdhani, Malhar Pandya etc in pivotal roles.

“Being A Single Mother Is Hard,” Says Deepshikha Nagpal

Tapu Does A Love Stunt