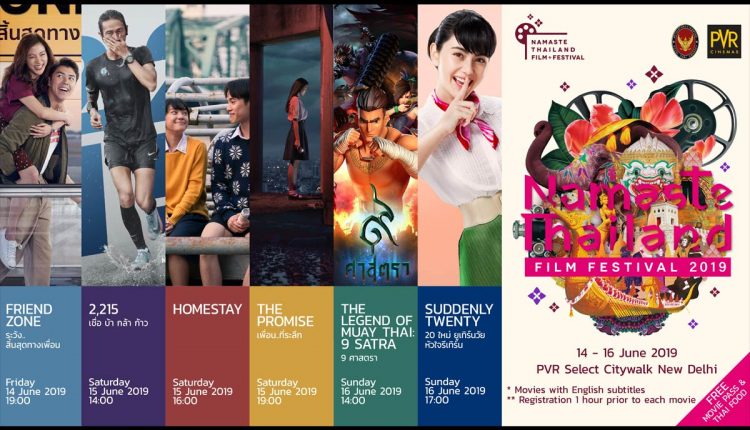 This is the third edition of the Thai film festival which was inaugurated in 2017 to celebrate the 70 years of Indo-Thai Diplomatic Relations. Continuing with the tradition,“Namaste Thailand Film Festival 2019” aims at bridging the gap between Indian and Thai cultures by bringing a taste of Thai films to the Indian audience. The festival features six specially curated movies which display the culture and tradition of Thailand in different ways.The movies that have been selected touch almost every genre of cinema including drama, comedy, horror, documentary, as well has an animation for the young audience. The festival will be inaugurated on 14 June 2019 at 19.00 by the Ambassador of Thailand, H.E Mr. Chutintorn Gongsakdi and will then be followed by one of the Thai blockbusters “Friend Zone”.

A special dish (Thai Green Curry in both veg & chicken options) will be given to the audience at all the screenings. The Chef from Ambassador’s Residence gave training to the PVR team for this special dish.The movie screenings will continue till 16 June 2019 and will show a total of six movies spread across 3 days. Souvenirs will be handed out to at the Festival for people who come to see the films and participate in our Facebook activity.All screenings are free. Registration starts 1 hour prior to each screening, on first-come-first-serve basis. One person can register for one pass for each film.

The Festival Program is as follows; 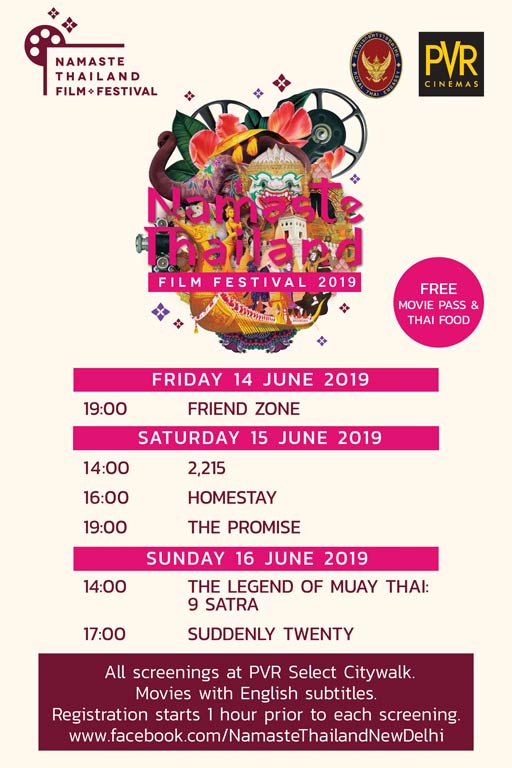 Friend Zone is a special area for those who are stuck in the middle where they cannot really stay friends with their close friends, nor move forward to be their friends’ lovers. Palm is one of those who has been stuck in the friend zone with his best friend, Gink, for 10 years. One day, Gink asks Palm out of the blue, “Have you wondered – what if we were an item?” Right then, sparks fly wildly inside Palm’s mind, knowing that this might be the only chance for him to cross the borderline. Although, Palm has no way of knowing if leaving the Friend Zone this time will lead him to the beginning of his romantic love life or to the end of his friendship with Gink for good.

A documentary follows the marathon run led by Athiwara Khongmalai to raise funds for Thailand’s public hospitals. His journey from the south to the north of Thailand takes 2,215 kilometres and 55 days.

A wandering spirit meets a mysterious man called the Guardian, who tells him he has been granted a new home in a teenage boy’s body, Min, who is lying dead in the hospital’s morgue. Living in a new body is known as ‘homestay’ and it is only temporary. For the spirit, he has 100 days to figure out who is responsible for Min’s death. Failure to do so will result in the spirit dying permanently and losing his newfound family, friends, and love.

In 1997, best friends Ib and Boum vowed to commit suicide together after their families were hit by the economic downturn in Thailand. Reneging at the last minute, Boum watched her best friend killed herself. 20 years later, Ib’s vengeful ghost is back to claim the promise.

Ramthep City was sieged by demonic Dehayaksa. A young boy was rescued from the city and had been trained the martial art of Muay Thai for the mission of delivering 9 Satra, the sacred weapon to the Prince of Ramthep to save the Kingdom. The boy and his friends took a journey to the city of Ramthep for their mission.

A stubborn old woman learned that her son was planning to send her off to a nursing home. While wondering on the street in grave, she was drawn to a mysterious light and walked into a photo studio. After she came out, she found that she had gone back to being a vibrant 20-year-old young woman again that she got a second chance to enjoy life.