GIGI HADID IS IN AWE OF PRIYANKA CHOPRA’S LATEST PHOTOSHOOT

Many Celebrities amaze us with their spectacular photoshoot but when it comes to Priyanka Chopra, she simply owns it. We have seen priyanka’s stunning look in many photoshoots, but this time something really unbelievable happened. Many of the times celebrities compliment each other on social media page for their gorgeous or handsome look but this time not any Bollywood Celebrity but Supermodel Gigi Hadid reacted to Priyanka Chopra’s latest photo.

IMG Model’s senior manager, Luiz Mattos recently posted a picture of Priyanka Chopra on Instagram to announce she’s now associated with his company and to that Supermodel Gigi Hadid cannot stop herself from praising Priyanka’s beauty. 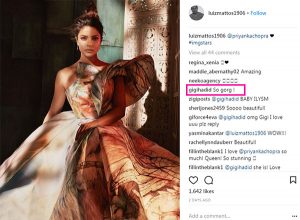 Priyanka Chopra recently hired IMG Model, a management firm to handle her professional commitments and guess what, Gigi Hadid is already associated with it.

Gigi Hadid is Zayn Malik’s girlfriend, who is the singer of Dusk Till Dawn and was recently in news when he did a photoshoot with Elle India and shared his thoughts about Shah Rukh Khan. Zayn’s favourite Bollywood actor is Shah Rukh Khan and he has even made Gigi watch Devdas.

PRIYANK SHARMA BLOCKED BENAFSHA SOONAWALLA FROM EVERYWHERE AND THEN THIS HAPPENED