After every controversy, RGV maintained that he is not shooting the “movie” in India but abroad and for those who don’t know, making a pornographic film in India is not legal. 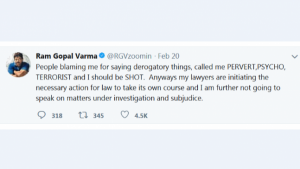 WATCH WHY PRIYANKA CHOPRA JUST BROKE A GLASS ON HER HEAD