Shiddat has been that one film which just refuses to go out of news. Ever since the announcement of the film, fans have been dying to witness the historic collaboration between Nadiadwala Grandson Entertainment and Dharma Productions. And to add to the excitement came the news that the film will unite Varun Dhawan and Alia Bhatt for the fourth time on the silver screen. But, it is the latest extension to the star cast that has made it all even more astounding!

As per the latest reports, Shiddat is going to have six protagonists and after Varun-Alia, Sonakshi Sinha, Sanjay Dutt, Aditya Roy Kapoor and Sri Devi have joined the cast of this mega project. There have been rumours that 2 States director Abhishek Varman will helm the film, however no official statement regarding the same has been made yet. 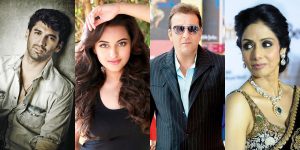 According to reports, Shiddat is a period love story which will extensively be shot around the country and is most likely to hit the theatres next year. How excited are you to see these stars come together and create magic on screen? Share your excitement in the comments section below!

#MANCRUSHMONDAY: 5 PHOTOS OF VARUN DHAWAN THAT WILL MAKE YOU GO WEAK IN YOUR KNEES

When Gagan Arora suffered an ankle injury days before Tabbar’s shooting, leaving him…

From Samir Soni as Dorabjee to Divyenndu as Munna Tripathi, let’s take a look…