Just a few days back the trailer of one of most anticipated film Sanju was released and we just can’t wait to watch the life saga of Sanjay Dutt featuring the very talented and charming Ranbir Kapoor.  It crossed almost around 52 Million views on YouTube in just a few days. The biopic of Sanjay Dutt’s life is full of different characters played by actors like Paresh Rawal, Manisha Koirala, Anushka Sharma, Sonam Kapoor, Dia Mirza, Vicky Kaushal, Jim Sarbh and Boman Irani. After the trailer got release we already told you who is playing whom in Sanju.

Naagin 3, actress Karishma Tanna is finally spoke about her role in Sanju. Yes, according to a leading daily, the actress said in an interview,  “I won’t be able to say that but I am playing an important role.” But according to the speculations, the actress is playing Dhak Dhak girl of Bollywood, Madhuri Dixit in the film.  Madhuri was a very important part of Sanjay Dutt life as they both were dating back. 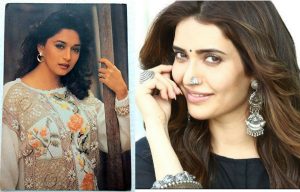 CANNOT KEEP CALM BECAUSE ZAYN MALIK IS COMING TO INDIA

BOLLYWOOD ACTORS WHO TOOK PATERNITY BREAK FOR THEIR WIVES