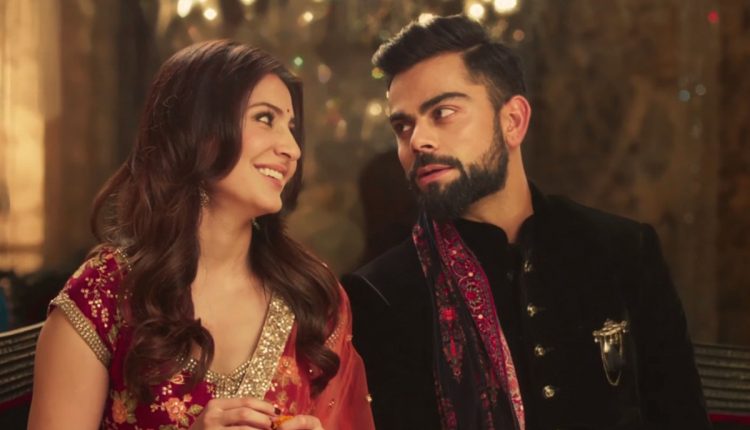 HERE’S PROOF THAT VIRAT AND ANUSHKA ARE DEFINITELY TYING THE KNOT!

Brace yourselves all “Virushka” fans out there!

Finally, It’s happening guys! Lovebirds, Virat and Anushka, are definitely taking their relationship to the next level. The rumours about Virat and Anushka’s marriage have been doing the rounds for two years now. This time though, it seems they aren’t just rumours but the legitimate truth!

We are giving you 5 reasons, that are proof, that Anushka and Virat are definitely getting hitched for life, in Italy.

1. The Sharma family is headed to the destination with way too much baggage!  We are sure the family’s wedding attires are mysteriously packed in those bags!

The couple is definitely planning to tie the knot in Italy this December! These photos of the Sharma family are enough to prove the speculation of Virushka’s wedding is true. Anushka’s father Ajay Kumar, mother Ashima and elder brother Karnesh all left the airport with bulky bags and luggage which clearly indicated that they are heading towards the wedding destination the city of Milan, Italy.  In fact, Virat has also left the country last night, which only added fuel to the fire.  The cricketer also opted out of the Test match and the limited-overs series against Sri Lanka in December citing personal reasons.

2. The Family Pandit was also spotted at the airport! Why would a Pandit be accompanying the family to the supposed ‘family vacation’?

According to Anushka’s manager, the Sharma family is leaving for a vacation. The point being, which family takes their family Pandit along with them on a family vacation?  The priest along with Anushka’s family was also spotted at the airport last night.  Interestingly, he was the same priest with whom the couple were sharing a frame, earlier this year in Uttarakhand.

3. The grand wedding reception will take place in Mumbai

As India Today reports, the couple has already picked up the marriage registration forms. They will register their marriage at the Bandra family court on January 4.  Anushka’s parents have invited some of their neighbours to the wedding. As everyone cannot travel to Italy, they have planned a grand reception in Mumbai on 21st December.  While Kohli’s family and friends are expected to be a part of the closed-door affair, the Indian team players are not a part of the invitation list. But they will be invited for a reception that will take place in Mumbai before the Indian team leaves for the tour of South Africa.

4. Anushka will be expected to dazzle in B’town’s most popular designer Sabyasachi Mukherjee ensemble on her wedding day

Further fuel was added to the fire when the designer Sabyasachi was spotted exiting Anushka’s house last week and guesses are that the leading designer is going to create Anushka’s wedding trousseau, or maybe he already has?!

Virat’s childhood coach, Rajkumar Sharma, who is also the coach of the Under-23 Delhi team, has excused himself from the final match that Delhi is supposed to play against Tamil Nadu on December 8, by giving a reason that his nephew is getting married. No points for guessing who the nephew is!

Happy teachers day to the best teacher in the whole world. Thank you raj kumar sir for giving me the lessons that have helped me go ahead in life. We have gone through ups and downs together but here we stand, stronger than ever before. Nothing could have been possible without you. The best partnership of my life. Thank you sir. You are amazing. ??

While we can’t attend the wedding, we are sure it’s going to be a spectacular one and we can’t wait to see them making their very first appearance as newly-weds!

DOES KIT HARINGTON DESERVE TO BE IN THE WORST-DRESSED LIST?