Where there’s Shah Rukh Khan, there has to be innovation! Continuing with the tradition of coming up with unique marketing and promotion strategies, the makers of Jab Harry Met Sejal are leaving no stone to stand out. The film has been making headlines since the very first look came out and now their unique format of releasing teasers in the form of mini-trails caught the audience’s attention. This was followed by launching the songs Beech Beech Mein and Butterfly in unique ways. And now, the only thing fans are looking forward to is the theatrical trailer of the film. If reports are to be believed, fans won’t have to wait for long!! 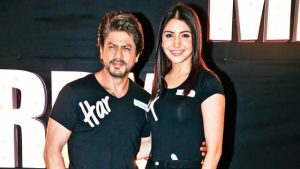 According to a report in a leading daily, now with less than a month left for the film’s release, SRK and team have planned to finally launch a proper trailer. A source was quoted as saying, “That was always the plan. To release around six-seven mini trails and three songs first, followed by the trailer. The trailer is expected to hit digital platforms sometime next week. The team is now discussing whether they want to have a proper event as well.”

We can’t keep our calm and hope that we get to see it real soon!

THE TICK IS BACK!