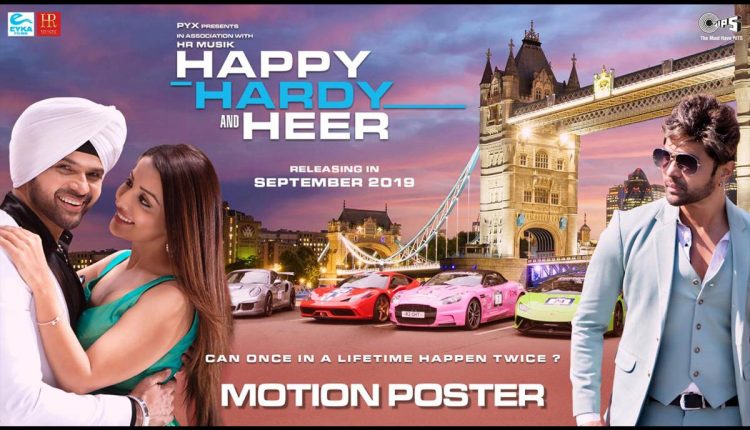 Happy Hardy and Heer will star actor composer Himesh for the first time in two characters . One  of a NRI businessman Harshvardhan Bhatt( Hardy )  from London and the other a Sardar from Punjab Harpreet singh lamba ( Happy) who travels to Europe with his beloved  Heer Randhawa played by Sonia Mann  in this romantic musical Happy Hardy and Heer  produced by Deepshikha Deshmukh and Sabita Manakchand and directed by choreographer turned director Raka . Himesh is playing a Gujrati NRI for the first time and it’s also the first time he is playing a Sardar , and  whether it’s a double role or not will be revealed later . “The  music and the script of Happy Hardy and Heer  is something which I’m really proud of and we are very confident about the product because today it’s only the content which can take you to the next level”, says Himesh  . Himesh confesses that his film Happy, Hardy and Heer is inspired  from the super hit punjabi movie Jatt and Juliet  and his company had purchased the remaking rights of Jatt and Juliet and now the rights are with Salman bhai as his company was supposed to adapt it. He also added that Jatt Bhat and Juliett is completely different from the Punjabi movie Jatt and Juliett and though Jatt Bhat and Juliet was the working title for Happy Hardy and Heer earlier, now the final title is Happy Hardy and Heer and the script is a completely fresh and is a triangle love story set in the romantic comedy genre.Himesh added that It’s in the lines of films like Tanu weds Manu and Love Aaj Kal with beautiful visuals shot in Europe and Punjab .”Each and every character in the film besides Happy Hardy and Heer is very well etched out and is a very happy universally appealing script with superb music. For the characters of the Gujrati guy Hardy Bhatt and Sardar happy Singh I have done a lot of workshops and am really happy with the way the film has shaped up. The film has been directed by choreographer turned director Raka who has done a great job. I had seen him directing some very good story forward songs of Shubh  Mangalam Savadhan and we got him on board to direct this film which has dialogues by Bunty Rathore. Happy Hardy Heer is slated for release in September and the official teaser will be released soon”, signs off Himesh Reshammiya