Huma Qureshi who is currently in the French Riviera attending the Cannes Film Festival will be walking the red carpet and representing Independent Indian cinema at the India Pavilian.

While the star was scheduled to fly out to London for a professional commitment, she will now stay back to attend the premiere of Manto headlined by Nawazuddin Siddiqui. 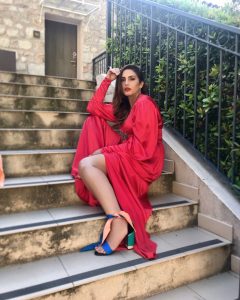 Huma made her Bollywood debut opposite the actor in Gangs of Wasseypur and shares a warm equation with the film’s director Nandita Das. When the two extended an invitation to Huma to attend the film’s screening , she immediately rescheduled her plans to accommodate the film.

The actress will be extending her stay by a day to specially attend the screening of Manto . It will also be a very nostalgic moment as Huma and Nawaz first attended the Cannes Film Festival to promote Gangs of Wasseypur

KRITI SANON : COMEDY IS NOT EASY

SALMAN KHAN: RACE 3 HAS A VIBE THAT EARLIER BACHCHAN SAAB, DHARMENDRAJI USED TO DO