What is your role in Yamla Pagla Deewana Phir Se?

I play the role of Deewana once again. I want to go to Canada. My dad plays the role of a lawyer is a paying guest, who pays the same meager rent for the last 50 years to his landlord.

In the last four years, you acted in only two films- Poster Boys and Race 3. Where did you disappear?

Isn’t it good that I didn’t vanish completely out of sight and was seen in at least two films in the last four years? I was lying low because I realized that the energy that I had earlier had disappeared and I preferred to sit at home rather than being seen in inconsequential films. I now realize that I had started taking things for granted

Hopefully will we see more of you from now onwards?

It is the love that my fans as well as the media have for me that has made me bounce back in the limelight once again. I owe this innings to Salmanbhai who has proved to be for me more than even my own brother or for that matter my own dad

In what way is Salman Khan responsible for your resurrection as an actor?

It was thanks to Salman Khan taking an interest in me like a big brother that I am now more than eager to revive my career which had taken a backseat for some we time because I realized that I had lost everything that I had earned as far as my career was concerned in between. I have realized that it is lucky to take birth as a human being and have started working more on myself and now I have the energy of a 20 year old young man though I will turn 50 next year. I want to play good meaty characters, not necessarily leading roles.

What do you like the best about Salman Khan?

It was Salman Khan who reminded me that my fans want me to do films like Gupt, Humraaz, Bichchu, Badal and Race 3 where I am seen as a stylized actor. It was for the first time that he made me to remove my short and appear even topless in Race 3. The best thing about Salman Khan is his humility. Do you know that he told me that he cast me in his film Race 3 because he needed me and did not at all take the credit for re-launching me with Race 3?

How would you describe yourself as a person?

I am in real life what I am in reel life. There are no facades as far as I am concerned. I have learnt a lot from my papa in public as well as private life and I have been honest to the core and true to myself. I have learnt a lot from what my grandparents had taught to my papa and he in turn passed on to us. My failure also has taught me a lot of things in the film industry.

I only asked him if he would be willing to do a small cameo in our film but Salman surprised me by going out of his way to bring Sonakshi Sinha, Shatruighan Sinha and Rekha too in our project to make it more colorful and star studded. I can never repay him his debut in this life.

Is it an advantage to be Dharmendra’s son and Sunny Deol’s younger brother?

I am more than lucky as I happen to be the son of Dharmendra and the younger brother of Sunny Deol. Though it is true that initially I got work in films only because I am his son, it is also true that my work too was appreciated and I came here to stay in films.

Did you make it a point to seek work from producers who matter when you stopped getting offers to act?

When my films started flopping and I stopped getting work from producers, people started making weird stories about me. I did meet a lot of people to ask for work but only two out of them really came forward to offer me work on my own merit. They are Salman Khan who cast me in his film Race 3 and Sajid Nadiadwala who cast me in his film Houseful 4. It is ironical that after working in a sequel like Race 3, I will be seen in sequels like Yamla Pagla Deewana Phir Se and Houseful 4.

When do you recollect your films had started flopping?

I think it all started when I did films like Dosti and Barsaat for Suneel Darshan. I do not mean to say that Suneel is a bad director. It only means that my period of bad luck started when I started working in his films.

What did you learn from your flops?

I learnt that you cannot survive as an actor on luck alone and you have to work hard to build your career because it is your work that ultimately speaks for itself. I started getting angry with myself for acting in bad films which I used to think were right to propel my career at that point of time. I confess that I have learnt a lot from the mistakes that I have committed in my career.

You seem to concentrate on building your body too!

Which film of your dad would you like to be remade today with you?

I think Pratiggya ought to be made as a remake with me in the lead but the main thing is that you have to move ahead with the changing times and make changes in the subject as today dacoits have almost become extinct in our country unlike in those times. 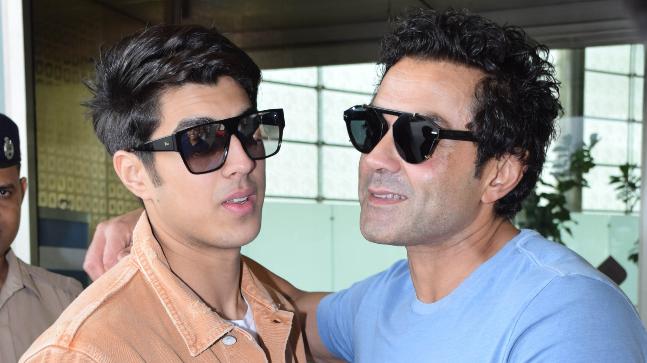 Poster Boyz was a super duper hit film in Marathi. Why do you think it failed to click when it was remade in Hindi?

Poster Boys was a loveable comedy in Hindi but people do not appreciate good, classy and healthy comedies in Hindi whereas its success in Marathi has now also prompted the makers to make a sequel too in Marathi.

Would you like to play the role of your dad in a biopic on him in Hindi?

Dad has had such a colorful life that I doubt whether anyone can set out to make a film on his life, if he does not know him at close quarters.

Which are your best films till date?

Joyous and Joyful : A day out in Jaipur with Laila Majnu

Jyoti Saxena Had A Gala Time At Lunch With Veteran Actress Mumtaz, Says,…

“Ultimately, you need to be happy, and that is the key to all the locks”, says Wagle…