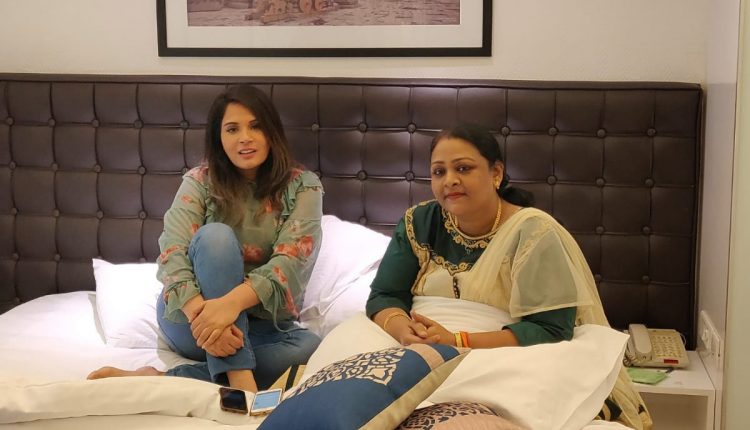 Bollywood is trending with so many biopics being captured on celluloid. There are several films on real life personalities queued up either for its release or are in the process of filming. This trend is captivating and filmmakers are on spree to narrate an interesting tale through a cinematic experience. Indrajit Lankesh is one such filmmaker who joined the bandwagon and is all set to present a biopic on south film industry’s biggest adult film star Shakeela Khan. Shakeela ruled the entire south film industry back in 90’s and continues to work even today as an actress. Her popularity was so immense even the filmmakers who went bankrupt were seen minting money after having Shakeela in their films. She garnered enough strength of pulling crowds to cinema halls weeks after weeks even biggest south superstars were in puzzled whether to release their films or not in competition with a Shakeela film.

Indrajit after a massive hunt roped in Richa Chadha to play the titular role. Richa was the apt choice for Indrajeet to play Shakeela. Before commencing the shooting, Richa had a rendezvous with Shakeela in Bangalore to under the nuances from real Shakeela herself. Seeing the camaraderie between both the actors and also to honour Shakeela’s popularity Indrajeet roped in real Shakeela for a cameo in the film. This would a visual treat for all Shakeela and Richa fans to see both reel and real Shakeela in single frame.

Speaking about it, director Indrajit Lankesh said, “I always wanted to make a film on Shakeela, I was immensely impressed with her onscreen and offscreen personality. I wanted to portray her story, the hardships and rough phase when she was not getting films and was trying for character roles. I wanted to show the true story behind the superstar Shakeela. She has been an integral part of the making of this film and she has given us such detailed insights into her life. Even Richa got to spend time with her, understand her style of talking, her body language and such nuances. In fact when she came on set, she gave us very interesting insights like about our art direction and how her house was and is in real life, such small details which have helped us. It was nice shooting her for Shakeela biopic, though I have shot with her before for my another film in 2003. That sparked an interest in me to make a film on her and in 2015 after conceiving the idea of making a film on her I met her and realised my dream.I feel every woman and girl who wants t be an actress should see her story, to know what she went through to become an actress and how it was such a compelling rags to riches to rags story of her life”.