INSIDE EDGE REVIEW: KEEPS YOU ON THE EDGE TILL THE LAST BALL

It is said that there are only two religions in India—Cricket and Bollywood. And whenever these two worlds have come together, we’ve witnessed nothing but fireworks. Excel Entertainment’s latest offering Inside Edge does that and how!

Amazon India’s first original series Inside Edge is the story of the Mumbai Mavericks, a T20 cricket team playing in the Power Play League(PPL). Set in a landscape of conflicting interests, where selfishness is almost a virtue, and where sex, money, and power are mere means to an end, Inside Edge is a story that pulls no punches, minces no words, and takes no prisoners. 10 almost 40-minute-long episodes leave you asking for more. The web-series, based on the politics of cricket stars Vivek Oberoi, Richa Chadha, Angad Bedi, Sarah Jane Dias, Tanuj Virwani and Sanjay Suri in the lead. Inside Edge is directed by former critic turned filmmaker Karan Anshuman, and produced by Farhan Akhtar and Ritesh Sidhwani under Excel Entertainment.

We don’t want to reveal the plot to you to ruin your excitement but we will definitely give you a glance of what’s inside INSIDE EDGE. Here are the top 5 reasons why you should watch it right now! 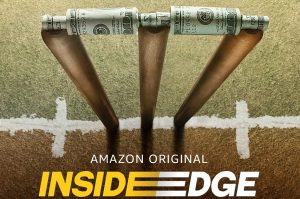 The casting is pitch perfect! Each actor fits into his/her roles and delivers a performance of a lifetime. Richa Chadha proves yet again that there is a lot more talent in her waiting to be explored. She plays the team owner Zarina Malik who reminds us of a certain Bollywood starlet. ‘Good enough’ would be an understatement for her as the actress just nails this one!

Apart from Richa, Angad Bedi, Sanjay Suri and Sarah Jane Dias are also competent performers. Amit Sial is terrific as the prejudiced, gun-toting senior player in the team. Sayani Gupta, who was last seen in Fan, shines in her brief scenes, while newcomer Siddhant Chaturvedi is fine as the replacement player in the team who is a victim of caste politics. However, the surprise package is undoubtedly Tanuj Virwani, Rati Agnihotri’s son. After some dull performances in a couple of Bollywood films (Luv U Soniyo, One Night Stand) Tanuj bounces back with a really confident performance.

We saw Inside Edge and the first thing we wanted to do was congratulate Excel Entertainment for making it look so good. Inside Edge assures you the quality.It hasn’t been compromised with just because it is for a far smaller medium than films. Full marks to the trio, Farhan, Ritesh and Karan here. From the first minute of Inside Edge, you see a stylish presentation which ascertains the producers’ investment and efforts. The cinematography is superb, the editing is crisp and that’s why it keeps you on the edge till the very last shot of the last episode.

3. BEST OF BOTH WORLDS

Coming back to where we started from, Bollywood and Cricket are two things which are worshiped by our nation wholeheartedly. We as Indians are very sensitive about it and any news regarding actors or cricketers is what excites us the most. Whenever there is some buzz about a cricketer and a Bollywood actress spending time together, they become talk of the town. Time and again we have witnessed an amalgamation between the cricketing world and the film industry, so what do you get when both the industries come together in a full-fledged manner? The answer is Inside Edge!

How many of us here in India talk about the web content being made around the world? All of us! Right? How many people around the world have accepted Indian content and are talking about it? We guess none! That is where Inside Edge comes into the scene. Inside Edge is the first Amazon India original series which has been launched in over 200 countries worldwide. It is the first step in taking Indian shows on a global level and putting India out there on the map.

The first season of Inside Edge consists of 10 episodes which are 40 odd minutes each. However, the team decided to bring out the entire season out in one go because that it what the viewers want today. They don’t want the makers to keep them waiting for a week for an episode and the makers identified that and fed just what their target audience wanted. Bang on with this decision, Team Excel!

All in all, Inside Edge is a treat for all those looking for quality binge-watchable content and all you cricket fans, don’t miss this! Inside Edge won’t bowl you out with an inside edge but could rather give you some runs or even a boundary. Paisa-Wasool? Oh yes, totally!

Produced by Excel Entertainment, Inside Edge is now streaming on Amazon Prime Video.