It Was A Dark Independence Day For The Team Of “Sholay”……

It was August 15,1975 .I had turned twenty -five in June and had fulfilled a promise I had made to myself .I had found a steady job in “Screen “after spending two of the most glorious years of my life with the greatest one -man institution called Khwaja  Ahmad Abbas (K.A.Abbas) from whom I had learned more than all I had learned in all the years before I was extremely blessed to meet him and work with him . I had told myself that I would give my life some meaning before I was twenty five or I knew I would not do anything in life.This was not a thought that came from any book or from any guru, it was a thought that came to a boy from a village who had decided that he would pursue a goal and not give up for what or who may .

It was Abbas  Sahab who got me my first assignment to write the cover story of a leading magazine called “Debonair”and I don’t know how I excelled in it and the management held a party to celebrate the success of the sales of the magazine which they said was because of my story . The party was held at The Oberoi and the best thing for me was the presence of Abbas  Sahab(who I have always referred to as Abbas Sahab ) and the response I received from some big people was so heady that I was found dead drunk by a police constable on a wooden bench on a far away railway station and had to pay the constable a hundred rupees to sleep on that bench till the first train came ….
I had written my first ten articles in “Screen”and one of them was a long article on the veteran actor and villain Jayant , who had died of cancer and the article was based on extensive talks with his son , Amjad Khan,who was all set to make his debut as a villain in Ramesh Sippy’s eagerly awaited film , “Sholay”. The article was liked by all , except by some of my seniors who believed that they were better equipped to write the article …

I was following the making of “Sholay “
very closely and was even excited as the date of the release came closer . I had known all the actors working in the film in some way  or the other, but I knew Dharmendra, Sanjeev Kumar, Amitabh,Jaya, Sachin,A.K.Hangal, Jagdeep and now Amjad Khan better and I knew R.D.Burman and Ramesh Sippy , but I was aware of the good work done by every member of the unit, which included the two cinematographers    Dwarka Divecha and K.Vaikunth, lyricist Anand Bakshi and composer R.D.Burman and my friend Jalal Agha and of course Helen without whom no one could imagine making a big Hindi film those days …

It was  August 15,1975 and there was excitement all over the country . It was Independence Day and it was also the day when “Sholay” was to be released .A grand premiere was arranged at the Minerva  in Bombay and like all big premieres the industry was invited , but I was not a part of the industry and I was a no body to be invited to such a grand event, but I wanted to be present at this one event.I didn’t sleep that night and kept making hopeless plans about how to enter the Minerva.I reached office a little early and was surprised to find my editor,Mr.S.S.Pillai in his cabin .
He had been kind to me by giving me the job in “Screen” ,he had been kind to keep me in the job even when I failed to keep my promise of learning typing (something I have still not learnt after fifty years and will repent all my life),He had given me the kind of assignments I couldn’t dream of , he had sent me to outdoor locations by air and made me live in five star hotels at a time when I was living in a “jhopda”,he had paid me four hundred and fifty rupees  a month when I was expecting only hundred and fifty rupees ! On my way to his cabin ,I wondered if he could work one more miracle for me and arrange for me to attend the premiere of “Sholay”.He made me sit and asked for two glasses of tea and then with a twinkle in his eyes he asked me if I would like to go to the premiere of “Sholay”. What could I tell him ? 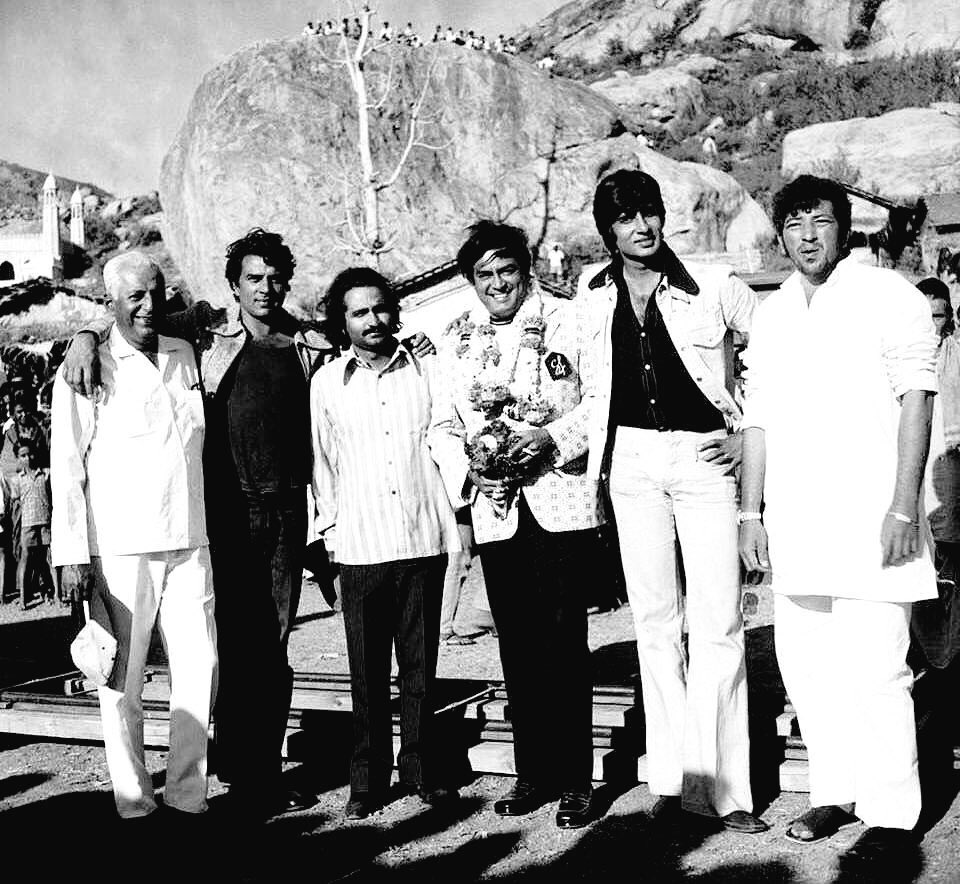 Before I could answer him, he placed his own ticket in my hand and said ,”take this money and go in a cab or you will get late”. For  several minutes I forgot all about “Sholay”and wondered what my life would have been without great men like Abbas Sahab and Mr.Pillai .
My still young eyes were dazzled when I reached Minerva . The film started . It was supposed to be a 70.mm print, but the print had not reached in time and a 35.mm print was screened .It was shocking to see the audience growing restless and by the time it was interval , people had already passed judgment on “Sholay”. it was a flop , they said and there was no chance of it being saved . The judgment was very severe and kept growing  more severe with every scene , dialogue and song .The worst happened when people from the industry refused to even greet the members of the unit . There was the silence of the graveyard all around .

On the way to the Grant Road station, some learned critics were heard talking about how the film was poor copy of some western films of the other or even a copy of a black & white film called “Khote Sikkey”made with  Feroz Khan and directed by Narinder Bedi , the man who after seeing “Godfather”had openly said that he could make ten films based or inspired by it . And some even went to the cruel extent of comparing the climax to the climax of a Dara Singh film. And some lashed out at Ramesh Sippy for his choice of Amjad Khan to play Gabbar Singh and felt that his original choice of Danny Denzongpa or Shatrughan Sinha would have been far better.There were the trade magazines of which”Trade Guide”and “Film Information “which were considered to be the last words when it came to the box-office and thier editors,
Mr.B.K.Adarsh and Mr.Ramraj Nahta said that “Sholay “wouldn’t run for more than three days….
Yes, they were right.”Sholay”didn’t run for three days.it picked up on the third day. And than didn’t stop running for the next five years and still keeps running to full houses whenever and wherever it is released .

It is forty – five years now and Sholay is history itself.G.P.Sippy, the producer made many other films before and after, but he will always be remembered as the producer of “Sholay”. Ramesh Sippy, his son has directed films like “Andaaz” , “Seeta aur Geeta”, “Shaan”, “Saagar”, “Shakti”, “Akayla”and other films and major serials like”Buniyaad ” and only recently directed “Shimla Mirch”a small film which went entirely unnoticed, but he will have to live the rest of his life as the maker of “Sholay”.Salim and Javed have split a long time ago . Sanjeev Kumar, Jalal Agha,A.K.Hangal,
Mac Mohan, Major Anand , Viju Khote ,Amjad Khan and Jagdeep are all now a part of history and so are R.D.Burman, Anand Bakshi and Dwarka Divecha and K.Vaikunth .The only witnesses to a grand slice of history are Dharmendra,Hema Malini , Sachin and Amitabh and his wife Jaya .

Why have we not been able to make another “Sholay”in the last forty -five years ? Will this question be answered of will this question reverberate through the
corridors of time and the pages of history ???
0 77
Share

Even After Seven Decades Of Independence, Are We Really Independent? Celebs Answer Jyothi Venkatesh

Athiya Shetty Extends Support To Sunfeast India Run As One