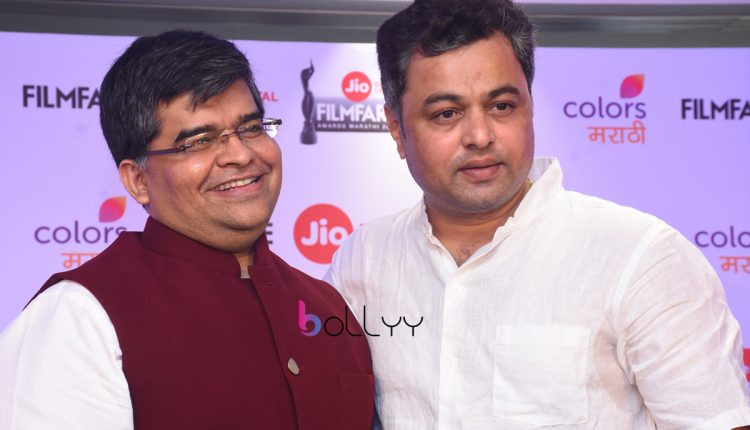 After the resounding success of the past three editions, Jio Filmfare Awards Marathi is all set to bring a magnanimous 4th edition for the audience. At an event held in Mumbai, Marathi Cinema’s super talented and versatile actor Subodh Bhave and Filmfare Editor Mr. Jitesh Pillai announced the date for the awards night preceded by a lamp lighting ceremony. The Red Carpet will be rolled out on the eve of 27th September 2018 at NESCO Ground, Mumbai. The awards will be televised on a later date on COLORSMarathi, the official broadcast partner.

Jio Filmfare Awards Marathi will set the stage for who’s who of the Marathi Film Industry as the stars gather under one roof to witness the most talented and deserving artists take home the coveted Black Lady. The night will mark the celebration of excellence in films and the outstanding work showcased by the artists in the industry. Actor Subodh Bhave expressed his thoughts on having a reputed platform like Filmfare to recognize and award the outstanding actors, directors and noteworthy films in regional cinema. Speaking about the same at the event he said, “Filmfare awards is a prestigious event and being a part of it is quite precious. Due to this platform, filmmakers in the Marathi film industry have gained the confidence of creating a variety of films and experiment, as Filmfare recognizes good content. It is the 4th edition of Filmfare awards this year and I thank Jitesh and Filmfare for bringing this property to Marathi Cinema and Jio for its continued association with the Marathi awards.”

Speaking about the 4th Edition of Jio Filmfare Awards Marathi, Mr. Jitesh Pillai, Editor, Filmfare said, “Every year, the Marathi film industry brings forth exceptionally conceptualized films and the very talented artists who raise the bar with their skills. With the 4th edition of Jio Filmfare Awards Marathi, we feel proud to have the credible work in regional cinema being recognized and awarded with the Black Lady, year after year. Propelling this further is Jio’s strong digital reach that has contributed in the growth of Marathi awards in terms of scale and popularity.”

Speaking on the occasion Nikhil Sane, Business Head – Marathi & Gujarati Broadcast & Movies, Viacom18 said, “We are yet again delighted to partner with Filmfare Marathi in its 4th edition. This year like the last few years has seen some remarkable Marathi films which have struck a cord with the viewers as well as got the cash registers ringing. Filmfare is not only a great platform to motivate the actors but also galvanize those exceptional writers and technicians who are taking Marathi cinema to new echelon of growth. For the viewers sitting at home COLORS Marathi will bring this entertainment extravaganza to their drawing rooms this festive season.”

The presence of veteran actors from the Marathi film industry, power packed performances by the artists and varied award categories will surely make the 4th edition of Jio Filmfare Awards Marathi 2018 an extravagant affair for the stars and the viewers alike.

Famed musicians Ajay-Atul want to be trained by Salman Ali