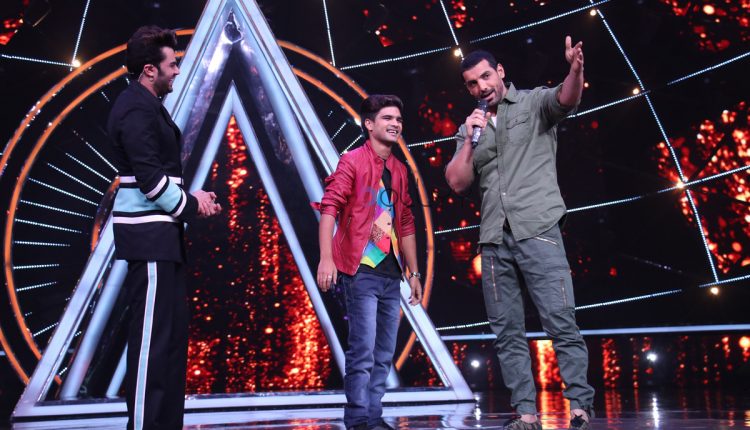 John hoists Salman Ali on the sets of Indian Idol 10

There are times when a musical rendition by an accomplished singer creates a magical atmosphere which leaves the spectators spellbound. Salman Ali, one of the top 13 contestants on India’s biggest singing reality show, Indian Idol 10 has been impressing judges and celebrities alike with his power-packed performances. Recently Bollywood super-star John Abraham and Manoj Bajpayee made an appearance on Sony Entertainment Television’s singing reality show to promote their upcoming movie – Satyamev Jayate.

19-year-old Salman Ali has consistently showcased his superior singing talent from the auditions stage to being selected in the Top 14. John Abraham and Manoj Bajpayee were swept off their feet as Salman belted out the iconic song – Naina Thag Lenge in his sufiyana voice. Both the actors couldn’t stop appreciating the talented singer’s musical ability and even requested him to sing again! The handsome hunk, John Abraham couldn’t believe that Salman hasn’t begun playback singing.

When contacted an overwhelmed Salman Ali said, “I am unable to express my happiness! When renowned actors like John Sir and Manoj Sir shower praises after one’s singing performance, it feels like a dream come true! When John Sir hoisted me and hugged me on the stage on Indian Idol, I felt as if I was on top of the world. Manoj Sir even asked me to sing again. What more could a budding singer ever wish for? When such established celebrities appreciate our talent, it boosts our enthusiasm to sing even better. It was truly one of the most memorable moments of my life and it’s all because of Indian Idol that I got this amazing opportunity to showcase my talent in front of the world.”