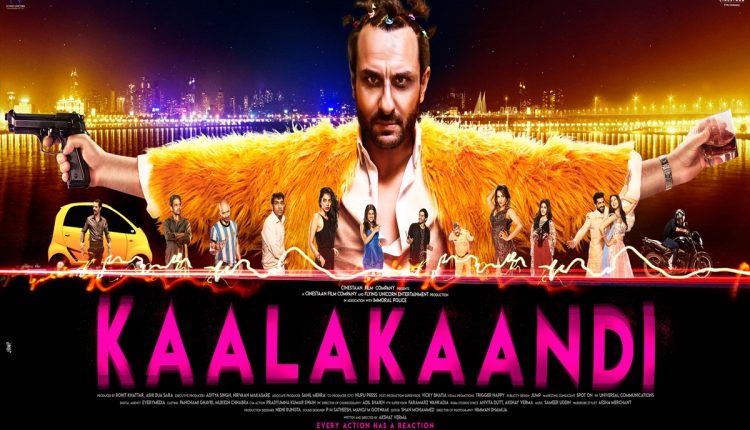 Kaalakaandi is a wild ride full of funny and quirky moments based on the lives of six Mumbaikars, which took place in just one night. The dark comedy is a different and unusual story just like its unusual title Kaalakaandi which is a Marathi slang, meaning things go horribly wrong.  The directorial debut of Delhi Belly’s writer Akshat Verma is about the unpredictable life of three sets of people and their individual story of love, life, greed and betrayal.

Director Akshat Verma beautifully and quickly introduced the six different characters of the film in just first few minutes of the film and you get to know about the life of all characters which is really appreciable. The story begins with the with Saif Ali Khan who never smokes or even drinks in his life but told by his doctor that he has stomach cancer on the day of his brother Angad’s (Akshay Oberoi) wedding who is also confused about his marriage. Meanwhile, a girl (Sobhita Dhulipala ) is all set to leave Mumbai for pursuing her PhD, leaving her boyfriend (Kunal Kapur) behind who perfectly playing his part of an insecure yet caring partner. The third story is about two people (Deepak Dobrial and Vijay Raaz ) who are working for a gangster and planning to rob their own boss for money in order to solve life’s problem.

Now, if you think this is too much to handle in the 112-minute film then don’t worry as Akshat’s direction and writing took care of most of the things and you actually enjoy this crazy ride as a person high on drugs. What actually happens if one takes drugs? In the film, you will get the answer with Akshat Verma’s outstanding imaginations turned into some beautiful visuals. So, full marks to the cinematography. I especially love those scenes when Saif started seeing some flying dolphins through the car window while driving with his groom-to-be brother Angad. Talking about the music composed by Sameer Uddin totally blends with dark comedy and story as well. The tracks like Swagpur ka Chaudhary and Kaala Doreya were perfectly placed in the film. You actually enjoy the music while watching the film but other tracks do not get stuck in your head for a long time.

Aksaht Verma has also smartly chosen actors for playing such characters like Saif Ali Khan, Deepak Dobriyal, Vijay Raaz and  Nyari Singh (Sheela) as they all do justice to their respective roles, which makes it an enjoyable and fun film. No doubts about Akshat Verma’s scripting as the film has many funny and bold scenes which are well written and picturised. For example Saif and Sheela’s first meeting scene and their escape from a cop, the bathroom scene and Deepak and Vijay last conversation scene. Saif and Nyari’s scenes are the best part and it is clear that the makers try to push some boundaries through the film.

But on the other hand, the film has some negatives also, like the character of Neil Bhoopalam, as a movie buff who is working for gangster boss is not at all fit in the story, the role of the photographer in the film is still not clear to me. Expect Saif and Sheela’s characters, I think audience want to explore more about other characters. The climax of the film is very unusual and unrealistic which results in shock when you leave the theatre and you have just one think on your mind, What the hell has happened in the climax? Like other Bollywood films, the portrayal of Mumbai police as overweight, absurd, and corrupt people is very boring and dull.

Basically, the film is a tragedy mein comedy, happened in different character’s life in just one night. It’s a crazy and unpredictable ride for all who want to watch something new other than typical Bollywood masala films. It’s a fun film which can fulfil your expectation of experiencing something new and it can definitely tickle your funny bone. It’s 2.5 stars out of 5.